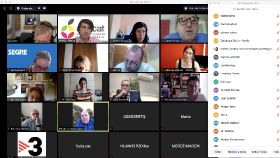 Afrucat announced the forecasts at via webinar

Catalonia is forecasting a peach and nectarine crop of 413,050 tonnes this year, a decrease of 18.6 per cent on the 2019 harvest, according to Afrucat.

The association said although growers face a complicated season due to a shortage of labour and increased production costs caused by Covid-19, the sector remains hopeful that the general shortfall in production across Europe will bolster prices.

Harvest is running 5-7 days earlier than last year in some regions, while others expect delays of 7-10 days.

The slowdown in new plantings observed since the start of the Russian veto in 2014 continues, with most new production coming from varietal renovation, Afrucat said. The association also noted that round peaches and yellow-fleshed nectarines accounted for most of the grubbing of orchards.

The association estimates that growers face an increase in production costs of around 6 per cent this year due to Covid-19.

He noted that normally prices for the earliest fruit start high but “in the last few weeks they would have already fallen and this year they have remained high”.

Another key element of the campaign is the exceptional quality of the fruit, which is expected to have a good size profile and high brix levels, Simon added.

Simon said the shortage of labour is posing significant problems for producers. He urged the government to do more to expedite the entry of undocumented Romanian workers stranded in that country and unable to get back into Spain.

“Efforts in this regard are moving forward and the next coachloads of Romanian workers are due to arrive next week,” he said.