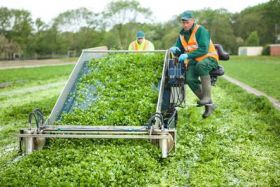 Brits have continued to fill the shortage of agricultural seasonal workers with new recruits helping harvest the watercress crop during “the weirdest” season in recent memory.

Lockdown and travel restrictions across Europe have prevented the arrival of seasonal workers from Europe – forcing growers to charter flights, and launch job recruitment campaigns in a bid to fill the roughly 70,000–strong labour force needed each year to harvest UK crops.

Tom Amery, managing director of The Watercress Company said his company sourced 25 British residents to work on their farms, which provide watercress to the UK’s major supermarkets.

“We realised quite early on in the lockdown that we were going to have issues with the harvest of watercress and our other salad crops if we didn’t quickly source the 25 staff members needed from other backgrounds,” Amery said.

“We were lucky as in both Hampshire and Dorset local people who had been furloughed or who were self-employed applied to work and underwent a rigorous period of training in the build up to harvest starting.

“We had a 10 per cent drop out in the first couple of weeks but after that everyone else settled in and now appear to be loving it.  For most it’s a complete change from their normal lives, while we haven’t had to train a fresh group of recruits for years, but I think we are learning a lot from each other.”

One new recruit, 40-year-old James Brice from Sydling St Nicholas, Dorset, previously worked as a fitness instructor, said the work had “opened his eyes” to the food supply chain.

“I originally saw it as a temporary role, offering to help because I recognised how important it is to harvest our crops, but I have actually found the work complements my own fitness business,” Brice said.

“It’s physically demanding so keeps you in good shape, and I can fit the hours around the zoom sessions I have been doing with clients. I’d definitely consider doing it next year to supplement my income.”

Sales in 2020 started slowly but The Watercress Company put this down to several factors mainly connected to changing shopping habits over the last nine weeks due to Coronavirus. They listed the key factors as:

In the last 2 weeks, however, there have been signs of a sales uplift, aided in part by the sunny weather but also by an offer at Tesco reducing their 85g bag from £1.30 to 97p.

This has been well promoted on line including via The Watercress Company’s virtual campaign to salvage the hugely popular World Watercress Eating Championships from the cancelled Watercress Festival and which can be found at https://www.facebook.com/LoveWatercress/

“We are a little below sales compared to last year but making ground daily. It’s definitely the weirdest UK season and sales environment I’ve ever experienced but maintaining supply of Fruit & Veg is vital to the nation’s health," Amery commented.

“Watercress has navigated choppy waters in the past with full uninterrupted supply for the last 120 years, even during the two World Wars. We are determined to maintain that record and so far, so good!”