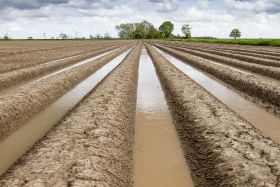 A £6 million fund has been made available to flood-hit farmers as producers across England continue to count the costs of February’s torrential rain.

The latest round of the government’s Farming Recovery Fund is now open, and eligible farmers and landowners can apply for grants to help them recover.

Growers in parts of Herefordshire, Shropshire, Worcestershire, Gloucestershire, Staffordshire, Nottinghamshire and North and East Yorkshire can apply for grants of between £500 and £25,000.

These grants follow earlier government funding for those hit by floods in July and November 2019.

The grants are designed to pay for uninsurable damage and, for example, the removal of debris or re-cultivation of grassland or arable land.

For this latest round of funding applications, the Rural Payments Agency (RPA) has introduced a simplified online portal to make it easier for farmers to apply.

The government has also relaxed the rules on diversification requirements. Previously, farmers managing more than 10ha of arable land would have been required to grow at least two different crops, and those with over 30ha at least three, in order to receive the BPS greening payment for 2020.

This derogation was provided to help avoid farmers from being penalised if they were not able to plant spring crops.

RPA chief executive Paul Caldwell said: “We know the flooding in February had a devastating impact on farming communities across the North and Midlands.

“The RPA has been working hard to ensure farmers feel supported during this time and from today eligible farmers will be able to access the £6 million fund to help them get back on their feet.

“Our new online portal will make it easier for farmers and landowners to submit an application and we’ve also given farmers an extra month this year to apply for their BPS payment.”

Farmers in parts of the country affected by February’s floods are being encouraged to read the Farming Recovery Fund February 2020 Handbook to see if they are eligible to apply for a grant.

The widespread flooding occurred as a result of Storm Dennis which hit the UK on 15 and 16 February and brought strong wind and extreme rainfall followed by further heavy rain up to 29 February.