Despite the challenges posed by Covid-19, Egyptian coop EGO is continuing its efforts to extend the grape season, according to MD Hassan Zaher 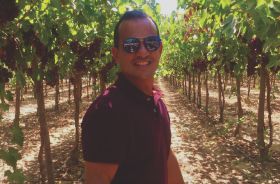