T&G's Steve Maxwell discusses the secrets behind the success of its Jazz and Envy club apple varieties, as well as the resilience of the industry in the face of Covid-19 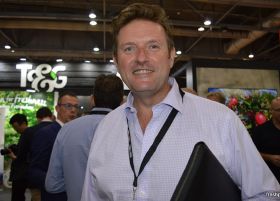 What’s behind T&G’s success with new club apple varieties like Jazz and Envy?

SM: T&G’s strategy is to be more involved in the ownership of the brand, including plant variety rights. It’s a very joined-up, end-to-end strategy. It involves working with the right growers and then selling the fruit to the right places without compromise. It’s about believing in a variety and being determined to do everything to give the customer that same quality again and again. It allows you to build a 52-week programme quickly.

SM: Like Jazz and Envy, Gala and Braeburn also came out of New Zealand. So out of all the global success stories in apples over the last 50 years, only Pink Lady has come from somewhere other than New Zealand. The country has had a real commitment to researching new varieties, which is a laborious process, endlessly crossing and crossing. You need the right genetic material to begin with, and then you try to get that down to varieties that consumers want to eat, growers want to produce and that retailers want to sell. We’re planting trees that will have a life of 15 years, so it’s a long-term commitment.

How does a new variety break into such a competitive market?

SM: There is a raft of new apple varieties out there. So many of them are good, but unfortunately they need to be great in order to rival those that are already out there. In terms of requirements, shelf-life is a given, as are yield and class 1 quality. These are absolutely vital, but consumers don’t actually experience these things. No one chooses an apple in a shop because of its resistance to disease, they choose it because they know they enjoy the taste and it looks great. Of course, there are also those varieties that taste great, but don’t have the robustness to make it to the market. But you wouldn’t launch a variety that didn’t achieve this basic requirement.

How do you explain the UK success of Jazz, which is now the fifth biggest-selling apple in the country?

SM: In the UK, the popular Cox has a bit more acid, so consumers have grown up expecting and wanting that combination of sweetness and tarty zing. Jazz has got the best of Braeburn, Gala and Cox, but overall it has a complex flavour, not just one note. It’s attracting consumers that were already eating apples, but find Jazz noticeably better.

Apples have been around forever in every country so we’ve witnessed a real evolution. There’s a nice spread of different flavours and colours. It is hard to improve on what we have now. Most people have eaten apples since they were toddlers so the penetration is enormous. That also means that people kind of know what they like already. So what you’re looking for is something familiar but better, and of course it has to be noticeably better.

How about the recent success of Jazz and Envy in Europe?

SM: This year we’ve sold more Jazz in Europe than ever before. Our traditional markets of Germany, Netherlands, Belgium and Sweden saw strong growth. This is down to fantastic fruit from great growers and a focused sales and marketing team. I’ve been particularly impressed by the work FruitEnz have undertaken in France where sales growth has been stunning.

Envy’s been performing better in southern European markets like Italy and Spain, as it’s a sweet variety. Thanks to our great partner growers, VOG, VI.P and Nufri, Envy had stunning sales levels this season. Spain and Italy have the majority of plantings at the moment, but we’re very excited about increased plantings also happening in France.

In the UK and northern Europe, there is traditionally less of a market for sweet apples, but we are seeing growth. It will grow more, but the UK hasn’t developed as quickly as we thought. Fantastic work was done growing the fruit and getting the distribution right. We hope for similar momentum going forward.

Have you been affected by the Covid-19 crisis? Do you anticipate any impact?

SM: The supply chain has been more robust than we all feared it would be at the start of the pandemic. A lot of hard work has been done across production, packing, logistics and retail - we’ve done really well to have such minimal impact. Unfortunately, it can’t help but increase costs, but we in apples are less worried about labour at the moment since we don’t start picking until closer to September. For products like strawberries and salads, companies have coped surprisingly well and must be congratulated.

The attitude across the supply chain has been fantastic. We are lucky to be in this industry. Everyone has handled it so well and people have been proud to be working to supply great tasting fruit. In Belgium, Enza operated with a skeleton staff, with one team at home and one in the office. We got the IT sorted and everyone’s mindset was right so we were ready to keep delivering for our customers. Amazingly, we have sold more this year. People are looking out for their health, and apples are a very solid purchase in the shopping basket. They last over a week so you can buy them with confidence, including online.

SM: We’re all still waiting to find out. In fact, the work we have done over the last two years to prepare for Brexit has put us in a good position for the Covid-19 crisis. All the Brexit scenarios we were planning for concerned people and flow of goods. We were ready for a market impact, it was just the cause of that impact that was unexpected. Of course, the last thing we want is a No-Deal Brexit. What we can’t have is any disruption to the flow of goods, something we’ve somehow managed to avoid during this period. To do this to ourselves for political reasons would be unthinkable.