Veg Cities' campaigns have served up an additional 10 million portions of veg since the outbreak of coronavirus, but the charity wants much more 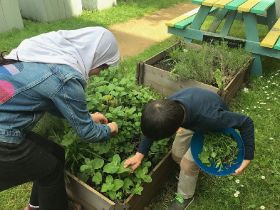 With the launch of Henry Dimbleby’s National Food Strategy last week, The Agriculture Bill back in parliament, and agriculture standards after Brexit in the headlines, food is back on the agenda and fresh produce sits at the heart of the matter.

It’s an agenda that Veg Cities has been fighting for relentlessly since its inception as part of food and agriculture campaign group Sustain.

“We’ve seen extraordinary progress in national food and farming strategy this past week. The first report from the National Food Strategy includes strong recommendations to address food poverty and inequality which result in lower consumption of fruit and veg for those on lower incomes,” says Veg Cities’ Sofia Parente.

“And the government’s obesity strategy has arguably some of the most ambitious new policies to date, particularly the 9pm advertising watershed for unhealthy food, along with constraints on promotions and progress on labelling.”

Parente’s optimism is well earned after Veg Cities enjoyed recent success campaigning for the government to commit to restarting the School Fruit and Vegetable Scheme in September, after it was suspended indefinitely during lockdown.

Despite this achievement, the organisation sees it as one small victory in a much larger war that must be won, and Veg Cities has no shortage of ambition.

“Imagine living in a city or town where everyone had access to an allotment or community food growing space. Where on your way to and from work your journey was peppered with markets selling seasonal, locally produced veg.

“When waiting for a bus, you would be rewarded with an edible bus stop. When looking for somewhere to have lunch, instead of endless hot food takeaways you would have eateries serving freshly prepared food incorporating plenty of veg grown locally.

“Shops displaying fresh, colourful veg at eye-level instead of a few wilted veg in the bottom shelfs. Advertising spaces all across town would display vegetables and healthier food instead of junk food. And when picking up kids from school, carers would find a fruit and veg stand and school meals would be made with produce sourced locally. Do you think you would eat more veg? This is our vision in Veg Cities and we are working with a network of 25 local areas to turn this vision into reality.”

The destruction wrought by coronavirus on the British economy put all food and fresh produce charities on the back foot however, as demand for food donations for the vulnerable and frontline workers soared.

Yet there were some encouraging signs during lockdown of greater fresh produce consumption, backed by Kantar sales data. But Parente warns the data doesn’t necessarily paint a clear picture of what’s actually happening.

“Two notes of caution with regards to the Kantar data. Fruit and veg consumption at home might not be equally distributed across age or income groups," Parente says.

“People on low incomes eat on average half of portion less vegetables and a recent study from Northumbria University found that children on free school meals were eating hardly any fruit and vegetables. It’s true there is more home cooking but younger people are also buying more takeaways. We need to interpret this Kantar data carefully.”

Nevertheless, Parente has observed some positives from the massive impact of coronavirus on our lifestyles, pointing out that there had been an increase in people growing their own fruit and veg.

“Another important silver lining is the increase in localised food purchasing behaviours, particularly when it comes to people purchasing veg boxes and food from farm shops, as confirmed by the Food Standard’s Agency Covid-19 Consumer Tracker, Parente says.

“Many members of the Sustainable Food Places network compiled early in the pandemic online directories of local food available which had record numbers of hits. For example, Brighton and Hove’s Food Partnership directory of local veg and groceries has had over 27,000 unique page views,” she says.

“Exeter launched an online farmer’s market selling fresh produce and other products from local producers. The next challenge is to retain and grow this interest in buying produce through these shorter supply chains and local producers, and we are working with initiatives such as Better Food Traders and many more to achieve this.”

Beyond increasing the physical presence of fruit and veg in our lives, is the more difficult question of economics. Price is a barrier that is harder to campaign against with margins for growers and producers already so low.

“Can we produce veg more cheaply? A balance needs to be struck between price to the consumer, alongside income for farmers. Meanwhile producers need to continue to innovate to meet these demands, whilst at the same time continuing to safeguard our biodiversity, soil quality and meet our climate obligations.

"With the UK importing around 40 per cent of vegetables there is a huge opportunity for more money to stay within our economy, but to do so will mean overcoming these other challenges, which will require support and vision from government, particularly at a time of uncertainty caused by Brexit and post-Covid,” Parente says.