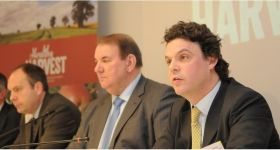 The NFU is calling on Defra to introduce a “robust” market monitoring system to track the effects of potential post-Brexit tariffs and avoid a detrimental impact on British producers.

The demand comes amid concerns at the union that the government could potentially fall back on plans announced in March 2019 to reduce many tariffs, including on horticultural products, to zero in the event of No Deal.

The so-called Temporary Tariff Regime (TTR) was announced by the government in March 2019 to avoid supply issues in the event of No Deal, but following the withdrawal agreement it was replaced by the UK Global Tariff (UKGT), announced in the May 2020. The updated tariff regime generally keeps tariffs on agricultural goods close to current levels (i.e. under the EU's Common External Tariff).

In any case, a no-deal Brexit would significantly increase import costs for many fresh produce companies since the UK currently pays no tariffs on imports from countries in the EU Single Market.

“The current government position is that the UKGT will apply in No Deal, which we support,” said the NFU’s director of EU exit and international trade Nick von Westenholz. “However, the temptation will be to return to the TTR – or something similar – to avoid supply issues. That is something we would strongly oppose as we would still be facing high tariffs on UK exports to the EU.

“Either way, we want a robust market monitoring system in place, as even under the UKGT there have been some reductions in tariff levels. But they are much less stark than might exist under a TTR type approach.”

He added: “If we feel that tariffs are problematic, then we will ask the government to take a look at tariffs again.”

Asked who he thinks will ultimately pay for increased costs in the supply chain after Brexit, Von Westenholz said he fears producers will probably have to absorb much of it. However, there have been repeated warnings from retailers that prices will rise if the UK fails to agree an FTA with the EU.

This week, Morrisons announced price cuts on 400 products, including fruit and veg, but later warned that prices will have to rise if the UK fails to negotiate a trade deal with the EU.

On the issue of whether a last-minute deal with the EU is likely, Von Westenholz added: “With what we’ve seen over the last couple of days, it's clear that no deal is a very real possibility.

“It would be imprudent not to plan for the possibility of No Deal, but with my glass half full I am still hopeful that a deal may be possible within the next month or so.”