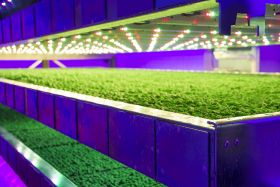 The multi-million-pound deal will introduce IGS indoor growing platforms to Jungle’s operations, initially outside Paris, to grow a variety of crops to supply major French retailers.

The first growth towers will be in production by early 2021, scaling incrementally to a minimum of 17 towers by the end of 2021. Jungle will grow a range of herbs and salads to supply select retailers across France. The company will utilise the patented IGS plug-and-play vertical farming platform to widen its portfolio and produce new varieties through an ongoing programme of crop trials.

Jungle’s indoor growing operations will also develop a variety of botanicals to provide natural ingredients to a world-leading flavour and fragrance business.

Jungle’s ethos is described as focusing on sustainable food production, with superior-quality of crops grown through a more efficient model, re-localising the supply chain, considerably reducing waste and using no chemicals. With extensive experience in the indoor growing space, the company has achieved recognition in the competitive retail market in France for the quality of its produce.

IGS was selected as the most economically viable and environmentally friendly system capable of meeting Jungle’s requirements to reach the industrial scale required by its customers, according to the two sides. IGS offers a highly controllable platform, designed to maximise productivity while minimising energy and water consumption.

When completed, the 9m high growth towers will be housed alongside a 1,500 sq m service area on Jungle’s site outside Paris. This will provide approximately 5,200 sq m of growing space, producing up to 425 tonnes per annum when fully operational, making it one of the largest vertical farms in Europe.

IGS chief executive David Farquhar said: “In recent months, global markets have been challenged considerably and export agreements have become more difficult to fulfil. The announcement of this deal is an exciting one not just for IGS, but also for the UK’s agritech sector as we showcase our international capability to support economic recovery post-coronavirus. The Jungle team has a strong reputation for the excellence and sustainability both of its produce and approach.

“Jungle needs a reliable, productised system that can meet its ambitious growth plans in France and beyond and IGS has proven to be exactly that, following a rigorous selection process. This deal is proof that our unwavering commitment to innovative, practical design, based on a deep understanding of delivering optimum growing conditions, is what customers want. The deployment of the system for Jungle begins immediately and I am encouraged by how well our teams are collaborating as we move forward together.”

Gilles Dreyfus, chief executive of Jungle, added: “We have established Jungle as a grower of superior produce with major French retailers and have plans to build on this reputation as we look at operations in other regions. This partnership agreement is a significant step forward for Jungle and our ability to deliver at scale for our customers. We are proud to be innovators in our sector and it is important that we find people and organisations who share this same vision."