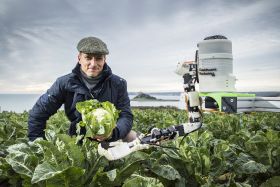 Agri-tech group Fieldwork Robotics has teamed up with one of the world’s leading veg producers to build a new cauliflower-picking robot.

The University of Plymouth’s spinout company will partner The Bonduelle Group over the next three years to build an automated picker that will be ready for commercial manufacture.

With increasing numbers of growers across Europe struggling to find enough pickers each season, the need for automated production has never been greater.

The partnership, which aims to have an early stage prototype after just two years, will build on cauliflower and raspberry picking technology already developed by Fieldwork Robotics.

“We have already enjoyed significant progress through our collaboration with Hall Hunter Partnership on the raspberry-harvesting version of the technology.

“The agreement with Bonduelle to collaborate on developing a second iteration of Fieldwork’s agricultural robots is a strong validation of the technology. We are very much looking forward to working with them to develop an effective system to harvest cauliflowers.”

The Bonduelle Group operates in more than 100 countries and generates annual revenues of approximately €2.8 billion a year, and will provide access to fields, vegetable know-how and harvesting conditions.

Claudine Lambert, group agronomy director, Bonduelle Prospective & Development, said: “Bonduelle has a strong commitment to sustainable and diversified agriculture in all of the territories where we operate globally. New technologies can play an important part in meeting that commitment, so we are delighted to be collaborating with Fieldwork Robotics and excited by the potential of its agricultural robots.”

Fieldwork successfully raised £298,000 in January 2020 to accelerate development and scale-up of the technology. It has also been supported by a £547,250 Innovate UK grant as part of a £671,484 project to develop a multi-armed robot prototype. Other partners in the project include the University and the National Physical Laboratory.

Just last week it was awarded an £84,000 Covid-19 continuity grant from Innovate UK.

Neil Crabb, chief executive officer of Frontier IP, the University’s IP partner, said: “Industrial validation is at the heart of what we do at Frontier IP, and so we are delighted with this announcement. It is Fieldwork’s third industrial collaboration following the recent announcement of its partnership with Bosch and the longer-term relationship with Hall Hunter.”