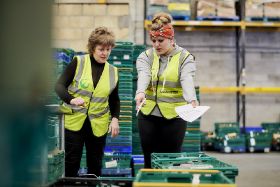 A ten-year partnership between Brakes and FareShare has diverted enough surplus food to charity to provide more than five million meals to vulnerable people.

Brakes provides fresh and frozen food and ingredients to some of the nation’s most famous pubs and Michelin-starred restaurants, as well as schools, caterers, care homes and hospitals.

The company first diverted surplus food to FareShare in 2010 and over the last decade it has redistributed over 2,000 tonnes of fresh produce, dairy, meat and frozen foods via FareShare’s UK-wide network of food warehouses.

FareShare chief executive Lindsay Boswell said: “The enormous range of fresh food we receive from the Brakes network goes to thousands of charities and community groups across the UK, helping them to get good food onto the plates of those who are most vulnerable.

“Brakes’ support has been critical over the course of the crisis, with demand from frontline charities more than tripling. We’re grateful to Brakes for their longstanding support and commitment to doing the right thing with their surplus food – ensuring it feeds people first.”

At the start of the coronavirus crisis in March, when the foodservice sector was suddenly shut down, Brakes responded quickly, significantly increasing the volumes of food it diverted to FareShare. Some 225 tonnes of stock was redistributed via the charity’s warehouse network.

This food, equivalent to over 535,000 meals, was then delivered to thousands of frontline charities, including foodbanks, homeless shelters and community centres working to support those most in need throughout the crisis.

Previously, diverting increased volumes of surplus food to charities would have incurred additional costs but thanks to funding from FareShare’s Surplus with Purpose Fund costs were significantly reduced.

The fund, which was part financed by the government, aims to reduce food waste by making it ‘cost neutral’ for businesses to divert their edible surplus to charities. It covered the cost of transporting food to FareShare’s warehouses.

So far, the fund has enabled FareShare to distribute an additional 12,000 tonnes of surplus food to charities by offering suppliers grants of up to £50,000 to offset the costs of harvesting, packing, storing and transporting surplus food.

In the decade that Brakes has been working with FareShare, the company has been presented with the Unilever Community Award at the IGD Food Industry Awards in 2011 and launched its own charity, Meals & More, which helps provide much-needed food to vulnerable families during the school holidays.

Brakes chief executive Hugo Mahoney said: “While we work hard to minimise surplus food, there are times when it is unavoidable and, when it is, we have a valued and longstanding partnership with FareShare to ensure that it reaches the tables of our nation’s most vulnerable people.”