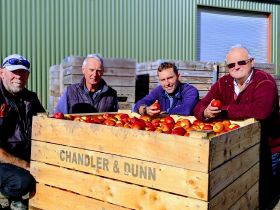 Jazz has once again been named the UK Tastiest Apple, scooping the title for the sixth time in eight years at Britain’s annual trade show for the topfruit sector.

The National Fruit Show (NFS), which normally takes place near Maidstone in Kent, held the first virtual show in its 87-year history on 22 October. Fruit judging of apples, pears, soft fruit and cobnuts took place behind closed doors and prize winners were announced in a webinar.

The Tastiest Apple contest was won for the fourth year in a row by a Jazz entry, grown by Chandler & Dunn near Canterbury in Kent, who regained their crown after a 2017 victory in the same category.

This year’s show, renamed National Fruit Show Live, featured 40 exhibitors and competition entries from over 75 topfruit growers, plus a few producers of soft fruit and cobnuts.

Although this is about 60 fewer entries than normal, with competitors being limited to one tray of fruit each his year, NFS chair Sarah Calcutt described it as “a phenomenal showing” given the circumstances.

She added that delegate registrations had exceeded initial expectations.

“The judges were really impressed given that all growing areas have had conditions that were too hot, too cold, too wet, with hail, frost, frost again, hail again,” Calcutt said. “It’s been really, really challenging to produce a beautiful crop of fruit this year.”

However, she stressed that warm pollination and good cell division, followed by a warm summer, have made British apples particularly flavoursome, intensifying competition in the NFS Tastiest Apple category.

Best of the rest

Among the other winners this year were Clive and Richard Edmed who prevailed once again in the Cameo class, with Elverton Farms in East Kent coming second. The Edmeds were also placed second and third in Cox and gained came third in Braeburn.

Marden-based Mallions came first in the AOV Culinary apples, equalling their 2019 entry, and also won in the Russets class and AOV Dessert Apples. They also finished second in the Braeburn class and third in Gala and Cox.

The Under-40s class was dominated by female growers, with Katie Langridge placed first and second in desert apples, while Kelly Shears came third.

In the pear classes B. Piper Partnership swept the board, winning the Comice, Conference and Concorde classes.