Potato supplier raises over £12,000 for charity as staff and suppliers run, walk and cycle over 25,000 miles 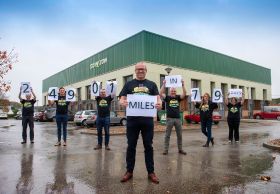 Branston has beaten its goal to travel virtually around the world in 80 days, completing the distance a day early.

The fundraising challenge, which started on Saturday 8 August, saw 120 Branston employees and suppliers across its three sites run, walk and cycle a total of 25,402 miles to support their charities of the year.

The team managed to finish 501 miles over its target of 24,901 miles - the distance around the equator - and raise funds for Lincs & Notts Air Ambulance, Children’s Hospice South West and Rachel House, which is run by Children's Hospices Across Scotland.

James Truscott, managing director at Branston said: “We’re really pleased to have not only achieved our goal early, but also to have gone that bit further. It’s a good job it’s a virtual voyage as we’ve overshot home by over 500 miles, putting us somewhere in Germany for the finish!

“I’d like to thank all the team and our suppliers for pulling together. Collectively we’ve covered over 300 miles a day, every day, for the past two and a half months and it's been a great motivation for us all.”

Truscott added: “Fundraising has been a real challenge this year, so we’d like to say a big thank you to everyone who has supported us and made a contribution. Branston will be matching the fundraising total for each of the charities as an extra boost and we’ll be keeping the JustGiving pages open for the next two weeks.”

And to donate to Rachel House; Children's Hospices Across Scotland, click here.