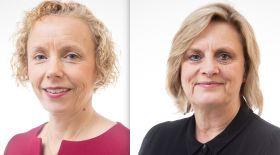 COO Tracey Orr and CFO Louise McFadzean have played pivotal roles in delivering unprecedented success at one of largest independent retail co-operative societies in the UK over the past 36 years and 18 years respectively, the Co-op said in a press release.

The pair will leave their roles at the society in the summer of 2021 and the recruitment process for their successors is currently under way.

Debbie Robinson, Central England Co-op chief executive, said: “After starting in my role at Central England Co-op, one of my first jobs was focusing attention on building a talented team to ensure we continue to thrive as a successful independent Co‑operative society. This led to my appointing the very talented Tracey Orr to the role of COO, bringing her wealth of experience to our family of businesses, and Louise McFadzean was promoted to the role of CFO, providing a high degree of technical expertise and governance.

“Tracey has brought exceptional levels of judgement to her role and her expertise has been honed during a career dedicated to the society. She has filled many roles, including HR and Change, and she has championed the Society’s understanding of mental health issues. Most recently, in her role as the Society’s COO, she has demonstrated her invaluable ability to build highly performing teams to deliver brilliant results.

“Louise has sustained the health of our finances and performance with her incredible eye for detail and drive for the highest standards. Louise has pioneered flexible working and has proved that it can succeed at the highest level. Since taking on the role as CFO she become an outstanding member of the executive.

“On behalf of the board, our colleagues, members and customers, and myself, I want to extend our most sincere thanks to Tracey and Louise for the outstanding job that they have done, and the strong position in which they will leave the society. We wish them every success in the future.”

Central England Co-operative is one of the largest independent retail co-operative societies in the UK, trading across 16 counties from the Midlands to the East Coast through more than 250 food stores, as well as funeral homes, filling stations, post offices, florists and other outlets. It is independent from The Co-operative Group.