Farmers at forefront of climate debate 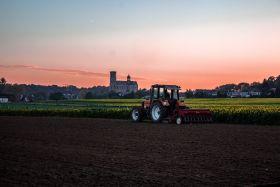 Farmers have a huge opportunity to contribute positively to the complex challenges of climate change.

That was a key message from LEAF’s annual conference this year, which ran under the theme of ‘Dealing with a climate change emergency – taking action now’. The event featured a panel of exerts including Jonathan Wadsworth, climate change lead at World Bank; Chris Buss, deputy director of the International Union for Conservation of Nature’s Global Forest and Climate Change Programme; NFU president Minette Batters; and pioneering climate-neutral farmer Duncan Farrington.

Opening the event, BBC rural journalist Tom Heap said the UK-hosted COP Summit in November 2021, combined with the plan to Build Back Better following coronavirus, gave farming a huge role to play. “It’s often said that when we look at climate change there is no vaccine or magic solution,” he said. “It’s true there isn’t a single thing that can solve it, but there are a couple of things – human wisdom and ingenuity. There are so many solutions out there, and many of them in the land space. There’s a massive opportunity to grab that.”

Wadsworth warned that the window of opportunity for preventing the world heating more than 1.5 degrees by the end of the century is closing fast, and that agriculture and the food system has a fundamental part to play in emissions control. “Agriculture is a victim of climate change, but at the same time it's a big culprit,” he said. “It could also be a massive solution to climate change, especially through carbon sequestration in soils. COP26 needs to be successful – we are almost in last chance saloon on climate change right now so COP26 needs to really up the game for everybody around the world and all the sectors which are involved.

“Food and agriculture needs to become central to controlling climate change. If that can come out of COP26 then we've got a good chance of moving forward successfully, but all eyes are on the UK for political leadership to get a successful outcome.”

Buss stressed that protecting nature brings many benefits both from a business perspective for farmers and mitigating climate change, whether it be water regulation, bringing back soil nutrients or carbon sequestration.

Batters referred to the NFU’s ambition for the UK farming industry to be carbon-neutral by 2040. “We want to see farmers as the solution and our ambition is to beat the government target by 10 years," she said. "With the right policy in place and the right incentives we think that 2040 is completely achievable to deliver carbon-neutral food. I passionately believe that the next decade is going to be the decade of the farmer.

“Yes, it's about bigger hedges, more trees, agroforestry, and beetle banks, but it's also about renewable energy, the bioeconomy and in particular climate-smart farming. There’s the opportunity to lead the world on what a sustainable food and farming scheme can look like and which truly does deliver carbon, so this is our time.”

Batters also insisted that farmers should be rewarded for their sustainability efforts in terms of market prices, though Wadsworth added that there are already a vast array of green investment funds available for nature-based and climate-smart solutions that farmers can tap into. And he warned that higher food prices aren't a good solution globally.

“A lot of investors are ready to invest in environmental services when there's a carbon price, because they can offset that," he explained. "There are all these financial mechanisms whereby this becomes a smart investment, so it’s a good business proposition. Farmers can recoup part of the cost of their climate-smart practices in order to keep food prices low through being carbon farmers as well as food farmers.

"I don’t think we would want to limit people’s access to food, especially in those countries that are struggling for good nutrition anyway.”