Ian Toth lands AHDB lifetime achievement award, being described as the “go-to person for all things blackleg and soft rot” 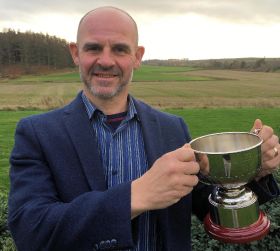 Ian Toth with his winner's trophy

Professor Ian Toth of Scotland’s Plant Heath Centre has been awarded the British Potato Industry Award 2020 in recognition of his "invaluable contribution" to the potato industry over the past 25 years.

The prestigious lifetime achievement award was presented by AHDB Potatoes chair, Alison Levett, as part of the Potato Industry Conference 2020, which was delivered via a virtual event on 24 November.

Professor Toth is a senior scientist and the director of Scotland’s Plant Heath Centre at the James Hutton Institute in Dundee, where he has been undertaking plant health research for over 25 years, focusing his efforts on both strategic and applied research. This has brought him into regular contact with UK and devolved governments, the public and industry to whom he regularly presents his work.

He also discusses potential solutions to pests and pathogens, particularly in regard to potato blackleg disease.

“Professor Toth continues to be a cornerstone and leader of the internationally recognised plant health work at the James Hutton Institute and is a globally recognised potato bacterial disease expert,” according to AHDB Potatoes.

Presenting the award, Alison Levett said: “Mention the phrase potato disease and Ian Toth’s name quickly comes into the discussion. Ian was trained under Michel Pérombelon at the Scottish Crop Research Institute but quickly became the ‘go-to person’ in the potato industry for all things blackleg and soft rot related and has more recently been working with the industry on a long-term strategy to control PCN.

“Through a series of rigorous scientific studies and an innate ability to collaborate, particularly with industry, Ian became the Head of the Weeds, Pests and Pathogens theme at the James Hutton Institute.

“In this position he was responsible for delivering solutions for controlling blackleg throughout the potato supply chain and extending this knowledge into other potato bacterial diseases.”

Toth was recently awarded £2m by BBSRC, NERC, Defra and the Scottish government to lead a Bacteria Diseases Initiative grant on blackleg, the most damaging bacterial plant pathogen in the UK.

Among the other award winners was Andrew Francis from Elveden Farms who landed the Above and Beyond Award for making a major contribution to the British potato industry. Francis is a first-generation farmer who has devoted his career to industry R&D and promoting UK agriculture.

On presenting the award, Levett said: “Andrew’s clear commitment to trial work on farm and his willingness to share his findings with the rest of the industry to drive profitability and sustainability makes him the clear winner of the first Above and Beyond Award. He involves all members of staff in his drive for improvement, constantly thinks outside the box and is willing to try new ideas.”

The Dr James Hardie Award for 2020 was awarded to Margaret Skinner of the AHDB by the Pre Basic Growers Association. The award for an individual who has made an outstanding contribution to pre-basic seed production or has given outstanding support to the association over many years.