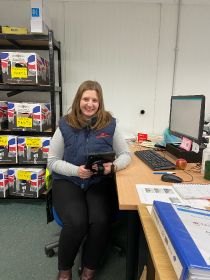 Ruby Powel has been working at Adrian Scripps

There has been a surge in demand for degree-level apprentices from fresh produce companies since the start of the pandemic.

That's according to graduate training scheme MDS, which says that despite, or perhaps because of, the pandemic, more fresh produce companies have joined as members to access the programme, and 50 per cent more graduates were placed in the autumn than the same time last year.

Since March, 10 new companies have joined MDS, including Adrian Scripps, Produce Investments and The Ethical Fruit Company, taking its total membership to 58, and 23 new graduates were placed in October for a six-month secondment, compared to 15 at the same time last year.

MDS’ two-year graduate training involves four six-month secondments, supported by mentoring and intensive personal and management development sessions for trainees with the MDS team. There is currently a total of 66 trainees placed in member companies, the highest number of secondments to date.

James  Simpson, managing director of Kent-based  fruit grower and packer  Adrian Scripps, has recently recruited his first MDS graduate trainee. As a business, he said they are finding it increasingly challenging to recruit the calibre they need, and had considered establishing his own graduate training programme with three other similar companies in the region but realised that it would be costly in time and money to resource it.

“We have been looking at how we can accelerate recruitment in the home market as we are finding it more and more difficult to recruit the right people into our business, partly due a declining interest in a career in the sector and to the limitations imposed by Brexit on employing foreign staff," Simpson said. "What attracted me to MDS is that they have an established model that works. They have the talent pool and a well proven  formula for developing graduates interested in the trade. Before we even see an application, they have whittled it down to the top 5 per cent, saving us valuable time and recruitment fees, and it’s been great to have extra resource at this time to help us focus on keeping the business moving in the right direction.”

The MDS trainee at Adrian Scripps, Ruby Powel, has a degree in agri-food marketing and business, and is leading the integration of a new software system into the business. “It’s great to have Ruby to dedicate to this project which will improve the overall efficiency of our operations,” said Simpson.

MDS placements have not been interrupted by the pandemic, according to the organisation. Sixty per cent of the current trainees are working on a flexible arrangement with employers, dividing their time between working from home and on-site; the remaining 40 per cent are working in the office full-time.

MDS chair Christine Tacon explained: “Throughout the pandemic we’ve been able to provide a continual supply of well-trained, motivated and confident future leaders, which has been an asset to businesses as they’ve had to navigate new challenges and review the way they work. It’s rewarding to see  that  in times of crisis, our trainees have been regarded as a benefit and part of progress. It’s also fantastic to welcome more companies on board that are seeking to integrate that advantage.”

MDS has also reported a sharp rise in applications from university graduates this summer.