Successful season for Arra 15 in India 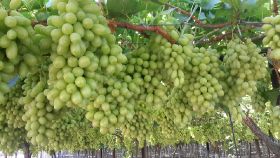 The Arra 15 variety is being grown in Nashik. Credit: Jupiter Group

Jupiter Group has reported on a successful season with the Arra 15 grape variety (marketed as Arra Sweeties) in India’s Nashik region.

The UK-headquartered company is the exclusive license holder for Arra grapes in India, in conjunction with its partners Sahyadri Farms.

Jupiter said the Arra 15 crop in Nashik filled 2,200 cartons (4.5kg) per hectare of production this season. This figure is expected to increase to approximately 5,000 cartons per hectare in 2021/22.

While there weren’t too many extreme weather changes in Nashik this season, up to 120mm of rain fell in some parts of the region in early January. Jupiter was pleased to report minimal damage to the crop.

“The quality and size of the bunches are impressive and even after two seasons of heavy rains, Arra 15 was not affected at all,” said Jupiter Group's table crape consultant Andre Vermaak. “I see a really great future for Arra 15 in India".

Indian-grown Arra 15 was exported to the UK, Europe, China, Singapore, Malaysia, the UAE, Saudi Arabia and the Maldives this season.

“These are really exciting times for us in India,” explained Tweddle. “A dream that started in 2012 is coming to fruition, with the first commercial volumes of Arra 15 this season.