Fenland grower rolls out host of new environmental measures, aiming to significantly reduce its impact on the planet and collaborate with customers on carbon offsetting 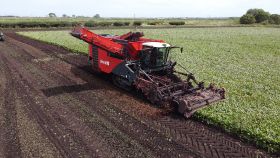 Greens of Soham has transformed its beetroot production practices

The supplier – which has major growing operations in the UK, Poland, the Czech Republic, Slovakia and Romania – produces beetroot, onions, seed potatoes and cereals.

“The Regen Strategy is something we’ve been working on for the last 10 years,” said Greens of Soham MD William Shakeshaft. “It’s about farming more responsibly, protecting soil health, producing less carbon, and wasting less crop, while also boosting our yields.”

With the aim of leaving the land in a better condition than they found it in, the business has already started using machinery that reduces soil compaction and collects a higher percentage of the crop.

Greens of Soham has also invested in planting trees; introducing more cover crops to help pull carbon out of the atmosphere and reduce erosion; reducing food waste through investment in automatic grading; and irrigating more precisely to reduce water usage.

As well as collaborating with machinery manufacturers Grimme and Dewulf, Greens of Soham has been working with scientists to better understand plant populations, and how vegetables can be produced more efficiently and sustainably.

The business is also involved in carbon offsetting, partnering with large blue-chip customers such as PepsiCo to bring down their net carbon emissions.

So far, the Regen Strategy has focused on the company's beetroot production, with efforts made to remove all wheelings from its beetroot fields, thereby using 15 per cent less land and reducing the need for herbicides, fertilisers and irrigation. This has improved quality and yield, while reducing inputs.

This year, Shakeshaft wants to achieve the same 15 per cent land use reduction in onions, and between now and 2025 the producer aims to introduce cover crops in all its fields so that no field is ever left empty between seasons.

“I want to be in a position where we are smart farming across our entire business,” said Shakeshaft. “That means working with exact science on herbicides, irrigation and seed densities. In everything we do, we want to put science and technology into the practice.”

One environmental technology the business has already started using is Raindancer, a GPS irrigation system that tells you exactly how much each crop needs watering and when. Coupled with soil probes to identify soil moisture deficits, this has enabled Greens of Soham to significantly reduce its water use.