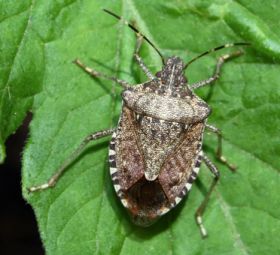 Scientists have confirmed that the brown marmorated stink bug (Halyomorpha halys), the scourge of fruit and veg growers, has arrived in the UK, reports The Guardian.

The insect, which looks similar to native British shield bugs, is considered a pest in the US and in its South-east Asian home because it creates brown marks on produce, affecting their marketable value, the paper said.

The brown marmorated stink bug was discovered in the gardens of the Natural History Museum on one of the hottest days last year and has since turned up at a house in Surrey, according to the paper.

Its spread has been mapped by the scientists at the museum and the horticultural research institute NIAB EMR in a British Journal of Entomology and Natural History paper, The Guardian reports.

Max Barclay, a senior curator at the Natural History Museum, predicted in 2014 that it was only a matter of time before the stink bug arrived. Now it has, he said it would not be possible to eradicate it.

“This [bug] goes for a wide range of fruit and vegetables so people are quite concerned about it,” he told the paper.

According to Barclay, because stink bugs move indoors to hibernate during the winter, they will have arrived in packaging, pallets and shipping crates from global trade.

The stink bug reached the United States in 1998 and rapidly established itself as an agricultural pest, with its feeding damage calculated to have caused $37m (£26.5m) of apple losses in 2010, according to the report.

But Barclay said the bug’s numbers were likely to settle down again after an initial “invasion”. “The invasive species makes a nuisance of itself before gradually moving into the background and becoming part of the established fauna," he told the paper.
“With climate change and global trade these stories are going to become more frequent.”