Belgian tomatoes on the rise

Tomato production is expanding in Belgium, driven by growth in cultivation under controlled lighting conditions, with exports also on the up 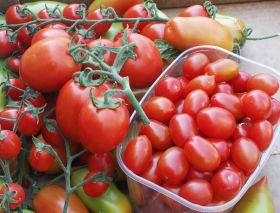 Greenhouse vegetables are doing well in Belgium, according to Nele Van Avermaet, product manager for fruit and vegetables at VLAM, Flanders' Agricultural Marketing Board.

Van Avermaet puts this success down to Belgian growers' state-of-the-art cultivation techniques, their expansion of lighted winter cultivation, smooth sales via the auction system and an enviably central location in Europe.

In 2019, she said, this successful formula was reflected in strong growth figures for tomatoes offered at the auctions within LAVA, BelOrta, Hoogstraten and REO Veiling.

"Total tomato production shows remarkable growth," she said. "This development is partly due to the fact that the area of lighted tomato cultivation has also increased. The expansion of the acreage in combination with increased winter production has led to a sharp increase in the supply of tomatoes at the Belgian auctions."

"Our tomatoes go mainly to neighbouring countries, but our southern European neighbours, Spain and Italy, are also demanding more and more Belgian tomatoes," she revealed. "Exports to the UK are equally on the rise."