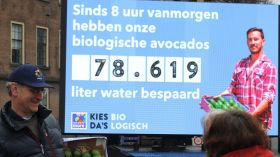 At 10am on 16 March, a message from Dutch organics specialist Eosta appeared on a 3x5-metre screen outside the Dutch parliament: "Since 8am," it read, "our organic avocados have saved 73,771 litres of water."

Eosta CEO Volkert Engelsman handed out organic avocados to passers-by as the counter rose, while distributing information on the impact of various organic products on water, climate and soil.

Live tickers are now also used to present these figures on the company's websites to help consumers make more informed choices. According to Eosta, they show the clear sustainable advantages of organic production over conventional.

"Choosing organic avocados saves 88 litres of water per kilo of avocados compared to conventional avocados," the company affirmed. "Organic soils contain more organic carbon and therefore act like a sponge, saving up to 40 per cent more water. In addition, the greater part of Eosta’s avocados come from growers in Kenya, who mainly use rainwater, which is naturally much more sustainable compared to irrigation using surface water."

The calculations were done by Soil & More Impacts, a German-based consultancy specialising in ecological impact analysis, which uses calculation models from the Food and Agriculture Organisation.

Engelsman invited retailers to make use of these figures to boost food transparency. "Food retailers sometimes appear to be afraid of transparency," he said, "while there is absolutely no reason in this case. I challenge supermarkets to show consumers what choosing organic means for water, soil and climate."

"Since 1 January 2020, Eosta has saved around 40,000 tonnes of soil, almost 5,000 tonnes of CO2 and 800m litres of water in relation to the conventional alternative," the company revealed. "The counter is running."