Ahead of this year's COP26 Summit, supermarket outlines key areas of focus where it can improve its environmental impact 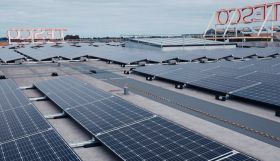 Tesco has launched a new climate change “manifesto” ahead of this year’s COP26 Summit in Glasgow.

The retailer has identified five key areas where it believes it can make the most difference, namely cutting absolute emissions from energy, supporting the UK’s transition to electric transport, tackling food waste, supporting the sustainable production of food, and helping customers eat healthy, sustainable diets.

Tesco chief executive Ken Murphy, speaking at The Grocer Conference, stressed the need for both efficiency improvements and cutting-edge innovation if the retailer, and the wider food industry, is to meet its climate change targets. In 2017, Tesco committed to science-based climate targets on a 1.5-degree trajectory and aims to reach its net-zero climate target in the UK by 2035, 15 years earlier than originally planned.

Through a combination of efficiency improvements and a switch to low-carbon innovation, Tesco pointed out that it delivered a 50 per cent absolute emissions reduction last year on a 2015 baseline, beating its 2020 science-based target of 35 per cent.

Murphy has now called on the whole of the food industry to play its part to deliver against the UK’s climate ambitions. “In this critical decade for tackling climate change, it’s vital we challenge ourselves to be more ambitious in our aims and accelerate progress against them," he said. "At Tesco, we’re playing our part by creating a better basket for our customers and the planet.

“No one business can tackle these challenges alone. We must take collective action as a food industry to drive the transformational changes necessary to meet the UK’s climate commitments.”

In 2018, Tesco launched a partnership with WWF to halve the environmental impact of food, and tackle some of the biggest issues connected to food production, including climate change. It has also pledged to continue its work to reduce emissions in its own operations, including switching to renewable energy across all its operations by 2030; partnering with renewable energy investors to launch new renewable power generation projects and creating new offsite UK solar and wind farms; and launching its first fleet of 30 electric home delivery vans, switching to a fully electric delivery fleet by 2028.

Tesco also reiterated that it set science-based targets for its supply chain in 2017, based on a two-degree trajectory. The retailer’s manufacturing suppliers have already made progress, reporting a 12 per cent reduction in emissions for 2019/20, exceeding a target of seven per cent. Tesco said it is now working with suppliers to trial and scale technologies targeting the biggest causes of agriculture emissions, such as low carbon fertiliser, methane-reducing feed, and alternative feeds such as insect protein.