Move will see organic veg box company save 68 tonnes of carbon a year, with business aiming to turn its entire national fleet electric by 2025 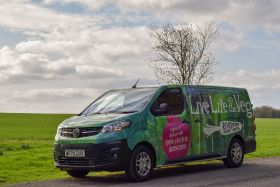 Bristol will boost its reputation as one of Britain’s greenest cities as organic veg box company Riverford launches its first fully electric deliveries in the city this month.

All Riverford’s organic seasonal veg boxes in central Bristol will be delivered by electric vans from the end of April under a major new climate-friendly investment.

Vauxhall’s new Vivaro-e van is an industry-first for electric deliveries, as it can travel the range needed by an average delivery (200 miles) on a single charge, while carrying up to a tonne in weight.

The vehicle was jointly named 2021 International Van of the Year, the first time a fully electric mid-size van has won the overall title.

Bristol citizens will soon see Riverford’s 10 electric vans delivering across the city, which collectively will save 68 tonnes of carbon a year. The company is aiming to turn 100 per cent of its national fleet electric by 2025, as part of a wider plan to cut its overall carbon emissions.

“We chose Bristol as the site of our first fully electric delivery hub because of its green reputation and commitment to climate change,” said Jason Holt, Riverford’s head of logistics.

“We know customers there will be thrilled that their veg boxes will now be delivered emission-free, and we’re looking forward to expanding our electric van fleet across the country.

“Diesel exhausts are a major contributor to poor health and climate change. Electric vehicles are an absolute no-brainer for all delivery businesses, especially Riverford where we pride ourselves on being environmentally conscious.”

Driver and Riverford co-owner Polly Atterbury added: “It feels so much cleaner than spending a day in a diesel van. It’s actually quite relaxing, partly because it's so quiet but also because it requires a smooth and gentle approach to get the maximum mileage.

“Like the work Riverford has been doing with packaging recently (removing plastic and an overall reduction), electric vans are a big step forward. If all the little vans delivering our food and internet orders were doing so silently and cleanly, it would have such a positive impact.”