This includes more than 24m plastic trays and punnets, and nearly 19m plastic tags, from fruit and veg ranges 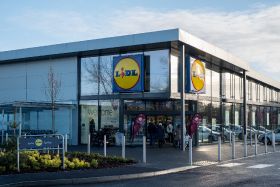 Lidl GB has announced it has removed over one billion pieces of plastic from stores across the UK as part of its strategy to “eliminate” plastic waste.

This includes more than 24 million plastic trays and punnets being removed from its fruit and vegetable ranges, and up to 25 million plastic lids from dairy and yoghurt ranges.

In addition, the discounter has cut nearly 19 million plastic tags from its fruit and vegetable lines, and 3.5 million pieces of plastic packaging on fresh flowers.

As well as removing plastic, the retailer has also begun using more recycled material. In the UK, Lidl has prevented the equivalent of 10 million water bottles from entering the world’s oceans since last year thanks to its use of recycled ocean-bound plastic packaging.

Following the success of the initiative, Lidl is expanding its use of the packaging innovation to prevent plastic collected from developing countries in South East Asia, from entering the ocean.

The ocean-bound plastic, which is already used in packaging across fresh fish and breaded poultry, will also be launched across berry packaging later this year.

Christian Härtnagel, CEO at Lidl GB, said: “It is fantastic that we have been able to reach this significant milestone which demonstrates our commitment to tackling excessive plastic waste and working collaboratively with all of our suppliers.

“We recognise, however, there is still more to do in this area which is why we are pushing to go further by removing even more pieces of plastic from our stores and packaging over the next two years and rolling-out our leading ocean-bound plastic packaging across more and more categories in our stores.”

This builds on Lidl’s existing plastic commitments to make 100 per cent of own-brand packaging widely recyclable, reusable or refillable by 2025.

This year, Lidl hit its target of ensuring 50 per cent of packaging is made from recycled materials, four years ahead of plan, whilst it also reduced plastic by 18.5 per cent, on track to reach its original target to reduce by 20 per cent by 2022.

Lidl also met its target of eliminating problematic plastic packaging (including black plastic, PVC and EPS) from its own label core food range and ensuring that 100 per cent of pulp and fibre-based own-label packaging in core food range are either responsibly sourced from FSC, PEFC, or equivalent, or made using recycled content.