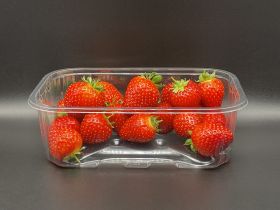 Eduardo Gomes, managing director of Waddington Europe, said the technology has enabled the packaging specialist to eliminate the need for bubble padding, which has traditionally been used to protect fruit from bruising and spoiling in transit. However, it needed to be removed for the container to be properly recycled.

“The Monoair cushion is now integrated into the base of Waddington's 100 per cent recycled PET (rPET) punnets, eliminating the need for a separate bubble pad,” said Gomes.

“That conserves resources without compromising on the high standards of product protection and quality that our customers have come to expect from Waddington Europe.

"We also took the opportunity to redesign and downgauge the punnets so that they now contain 30 per cent less plastic than before while still maintaining their excellent structural integrity," Gomes added.

Having undergone successful trials with two of Waddington Europe's largest soft-fruit customers, the Monoair cushion punnets are now available for the 2022 soft-fruit season.