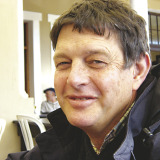 An expert commentator on the international fresh produce business, Fred previously worked as group manager of corporate affairs at Capespan, which at the time was South Africa's single-desk exporter for all fruit shipments out of the country.