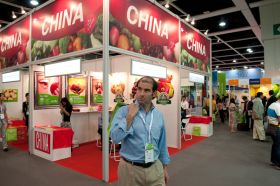 ASIA FRUIT LOGISTICA attracted almost a third more visitors from across the world to Hong Kong last week, confirming its status as the must-attend trade event for the fresh fruit and vegetable business in Asia.

Over 5,300 visitors from 63 different countries attended the three-day event, which took place on 7-9 September at the Hong Kong Convention and Exhibitor Centre (HKCEC). Those figures marked an impressive 28 per cent growth on last year’s visitor numbers.

“We’re delighted to see the very strong growth in the number of buyers and trade visitors who attended – and more importantly the continued high quality of these visitors,” said Gérald Lamusse, managing director of event organiser Global Produce Events GmbH.

Official survey results revealed that almost three-quarters of all visitors held leading management positions in their companies, and that more than 90 per cent of them were involved in the purchasing and procurement decision-making process.

The majority of visitors were trade buyers representing leading importers and retailers from across Asia’s burgeoning consumer markets as well as from Europe, the Middle East and the US. And they found an exhibition that had also expanded significantly.

Some 332 companies from 33 different countries showcased their products and services at this year’s ASIA FRUIT LOGISTICA, marking increases of 9 per cent and 10 per cent respectively on last year’s figures.

Since it was first launched in 2007 with 116 exhibitors, ASIA FRUIT LOGISTICA has seen its exhibitor numbers grow by 186 per cent.

Companies and organisations from 12 countries across Asia again accounted for the largest percentage of exhibitors this year (36 per cent), with China remaining the largest single exhibitor country in terms of exhibitor numbers (77 exhibitors).

The European presence was also very strong, with 10 different countries from the region together making up 27 per cent of exhibitors. Italy, in particular, recorded a strong growth in the number of companies taking part. The 28 exhibitors from Italy were enough to see the country overtake the US (with 26 exhibitors) to become the second-largest national presence at the show.

This year’s ASIA FRUIT LOGISTICA also saw the first national pavilion from Egypt – one of many country pavilions at the show that also included Argentina, Australia, Chile, China, France, Italy, the Netherlands, New Zealand, Peru, South Africa, South Korea, Taiwan and the US.

“In summary, this fifth edition of ASIA FRUIT LOGISTICA mirrored the strong growth in the Asian fresh produce business and underlined its position as the must-attend event for the region,” said Mr Lamusse.

The dynamic growth of the Asian fresh produce market was also highlighted by this year’s Asiafruit Congress, which attracted 576 delegates from 36 different countries. The three-day conference, which has been organised by Asiafruit Magazine for almost 15 years, runs alongside ASIA FRUIT LOGISTICA.

The Asiafruit Congress kicked off with a high-powered retail panel involving senior executives from Tesco, Wellcome/Dairy Farm Hong Kong, Metro Cash & Carry and Central Food Retail. The following five conference sessions covered a range of themes, many of which explored opportunities for new and emerging products or concepts in Asian markets, such as fresh-cut produce, Pink Lady apples and logistics solutions. A supplier spotlight on Peru also provided an engaging insight to the possibilities for this rising South American export force in the Asian markets.

“It was clear from our conference discussions that the marketing environment in Asia is evolving very quickly and becoming more conducive to developing different products and concepts from all over the world,” said John Hey, editor of Asiafruit Magazine.

“Understanding these markets and their changing requirements, and forging the right relationships backed by a committed approach, are key to success. The Asiafruit Congress combines with ASIA FRUIT LOGISTICA to provide the industry with the best vehicle to achieve those goals.”

Another notable trend for this year’s ASIA FRUIT LOGISTICA was the increase in the number of industry meetings and functions taking place around the core trade fair and conference event. The International Federation for Produce Standards (IFPS), chaired by United Fresh CEO Tom Stenzel, hosted its first-ever Asian regional forum while FAO organisation the Agricultural and Food Marketing Association for Asia and the Pacific (AFMA) also held its board meeting on the fringes of the event.

The next ASIA FRUIT LOGISTICA and Asiafruit Congress take place on 5-7 September 2012 in Hong Kong.

“This year’s participation by Chile at ASIA FRUIT LOGISTICA has been fantastic. We’ve had more than 47 companies travel from Chile, which represents more than 70 delegates. We’re really pleased with the results and the number of visitors that came this year. We’re very pleased with our stand’s position, and ASIA FRUIT LOGISTICA is definitely the platform for the fresh produce business in Asia.”

“It’s been really good. We’ve had our existing customers here asking for more fruit, and there are many more potential customers. We’ve seen a lot of buyers from India, South East Asia and the Middle East. If they turn into good customers it will be a real success.”

“We are very satisfied with the pavilion this year. There has been more engagement between the exporters and their customers and as a country we have to advertise our high-quality produce more, so this is a very good event for us.”

“Each year the show gets bigger and better. In the next 10 years, this is going to become huge. There are people coming from all over the world, not just Asia.”

“We opted to hold a meeting with our Asia, Middle East and North America reps here alongside ASIA FRUIT LOGISTICA this year. It makes sense because so many of the Zespri team are here anyway.”

“The presence of French companies here at ASIA FRUIT LOGISTICA has increased notably, with new exhibitors Apple-Bird, BVL and Condi joining other established players to grow their business in the Asian market.”

“Being here at ASIA FRUIT LOGISTICA is really important to the development of our business globally. The Asian market could end up being bigger than Europe. There’s a real noticeable, growing demand for fresh-cut and value-add produce in many countries in this region.”

“This show has done wonders for our business in terms of making new contacts. It’s not just the exchange of business cards; it’s the conversion rate into actual business that makes the event so wonderful. You meet the serious people from right across the industry.”

“This is my first time at ASIA FRUIT LOGISTICA, and we’ve had very good contacts with potential customers in our main businesses, which are stonefruit, grapes and apples. I see with surprise the vast diversity of buyers, even coming from India and the Middle East. It’s something very good to have come to for the first time.”

“I think there were some big trading arrangements and deals being struck `at the event`. I could feel the growth of the China market; it was there in the way everyone was talking and dealing, and to me, any information that helps you better understand that is really valuable.”