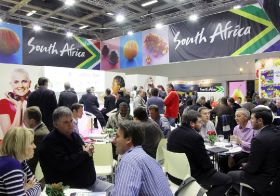 The South Africa fresh produce industry has achieved a significant breakthrough in its negotiations with the country's Department of Trade and Industry (DTI) over the issue of funding for promotional activity at industry trade fairs, Eurofruit has learned.

Speaking during the Eurofruit Congress Southern Hemisphere in Cape Town this week, Anton Kruger, chief executive of the country's Fresh Produce Exporters' Forum, revealed the DTI had agreed to fund a South African stand at next February's Fruit Logistica in Berlin as well one at World Food Moscow in Russia next September.

"The industry itself will continue to fund a shared stand at Asia Fruit Logistica in Hong Kong," he added, confirming that arrangements hastily put in place for the recent edition – after the DTI withdrew its own funding – would be the same in 2013.

According to Kruger, the prospects for improved support from the South African government remain positive, although negotiations over a separate agreement that might secure funds over a longer period remain ongoing.