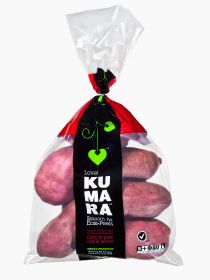 Lisa Cork of Fresh Produce Marketing has won the PMA-Produce Plus Marketer of the Year Award 2013.

Lisa was unveiled as the winner of the Marketer of the Year Award 2013 on Wednesday 12 June during the PMA Fresh Connections conference and trade show in Sydney, and was chosen for her marketing work on the Delta Produce ‘Love Kumara’ rebranding project.

Through consumer research, Lisa identified that many shoppers were put off buying kumara by their large size and often-knobbly shape. The research showed that consumers would be happy to pay for smaller, smoother kumara that were easy to peel.

A new product, which saw kumara sized and graded differently, was launched under the Love Kumara brand and named Easi-peels with the tagline ‘Smooth, easy to peel, cut and serve’.

The Love Kumara project was highlighted by the award’s judges for its consumer-led approach, which used shopper data and insights to develop a new brand and product strategy.

As well as its smart marketing to consumers with clever branding and on-pack messaging, the campaign was singled out for its effective marketing to other key stakeholders in the supply chain. In particular, growers were led to see beyond tonnage as a strategy for growth and to recognise how producing and packing kumara to better meet shopper needs could deliver value growth and more profits.

According to Delta Produce, the campaign’s introduction of 500g Little Gourmet packs of kumara helped growers to achieve a more than 200 per cent increase in sales values.

“Lisa’s characteristically creative and enterprising marketing campaign succeeded in bridging the gap between growers and consumers by inventing a new product and driving value growth in the process,” said John Hey, managing editor of Produce Plus. “’Love Kumara underlined the opportunities to be tapped for this industry through better understanding the consumer and meeting their needs.”

“PMA warmly congratulates Lisa and the Delta Produce team on their excellent Love Kumara campaign,” said Michael Worthington, CEO of PMA Australia-New Zealand. “It was a worthy winner amongst another very strong field of entries.”

A full interview with Lisa Cork will appear in the upcoming Spring 2013 issue of Produce Plus.

Now in its second year, the PMA-Produce Plus Marketer of the Year Award is the premier award for marketing in the Australasian fresh produce and floral industries.