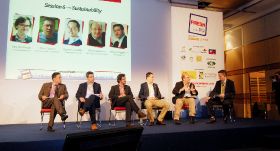 The European fresh produce business must do more to win the trust of increasingly cynical, disloyal consumers if it is to reverse a worrying trend of declining consumption and a notable shift in attitudes towards traditional forms of marketing.

That was one of the key messages to emerge from FRESH2013, the annual meeting of Europe's fresh produce industry leaders.

Henri Rensy, co-founder of Écoles des Marchés de Lille Métropole, suggested that the decline in consumption was down to a lack of knowledge and that the key to future success was to target today's children and young people.

Around 150 delegates attended this year's FRESH Congress, which took place at the Pullman Bercy hotel in Paris on the tenth anniversary of its first edition, also held in the French capital.

Vincent Dolan, European marketing manager at Total Produce, explained how his group had targeted the smartphone user as it looked to tap into new technology as part of its promotional strategy.

"The fruit and vegetable fixture is the last place people would expect to see telecommunications innovation, and we saw that as an opportunity," he noted. "We want to ensure that no Total Produce customer is more than two clicks from any nutritional or promotional information that they require."

Linda Eatherton of US-based PR and marketing agency Ketchum highlighted the rise of the so-called food e-vangelists, a set of consumers driving opinions on food, and urged the fresh produce industry to build relationships with this food buyer sub-set.

"The food e-vangelist buys more fresh food and less packaged and convenience products – they could be an ally for the fresh produce industry," she explained. "They are helping to change opinions about how food should be sourced and processed."

However, she warned that the right approach was required to get this potentially powerful group of consumers onside.

"Food e-vangelists are completely put off by marketing, they want solid facts not what they see as spun promotions," Eatherton added. "They expect to connect with a company socially. If you listen to them and engage, do good and effect real change, they will spread the word."

Another of this year's speakers was Arnauld Corsault of Chronodrive, the innovative click-and-collect retail concept being rolled out by Auchan across France.

According to Corsault, the concept is designed to allow consumers to pick up their groceries on the way home from work, increasing convenience and reducing food miles. "The environmental footprint of an Auchan Chronodrive is four times less than that of a supermarket," he claimed.

Sustainability was a major theme of this year's FRESH, reflecting the growing importance of efforts to improve environmental, social and commercial aspects of fresh produce supply in all areas of the industry.

Raphael Schilling, head of fresh produce sustainability at Coop Switzerland, commented: "We are aware of the need for sustainability. For the fruit and vegetable sector, we identified four areas to target – the social side, water and soil, pesticides, and air transportation. We consulted a lot of stakeholders in order to determine these key challenges."

Univeg's Ben Horsbrugh said that global competition for fresh produce supplies would only intensify in the future, due to population increases, a growing middle class in the developing world, soil erosion, competition from other commodities and climate change.

"The biggest problems will not be solved by companies like Univeg alone," he concluded, "but will require more co-operation between all stakeholders in the supply chain, including retailers."