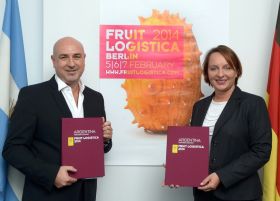 Fruit Logistica 2014 agreement made in Buenos Aires by Javier Dufourquet (left), executive director of Fundación Exportar and Barbara Konner, CEO in the German-Argentinian Chamber of Industry and Commerce representing Messe Berlin in Argentina.

Fruit Logistica organiser Messe Berlin has announced that Argentina will be the partner country for the 2014 event, which takes place at the Berlin Exhibition Centre on 5-7 February next year.

Argentina has exhibited at the annual event every year since 2000, with its pavilion organised by Fundación ExportAR.

"As a major fruit and vegetable producer, Argentina exports a wide variety of products to more than 60 countries," said Dr Christian Göke, Messe Berlin's chief operating officer. "Over the past few years, the nation's export earnings increased by 20 per cent to US$2.2bn. These figures underline Argentina's growing importance as a producer and exporter in the global fresh produce sector."