More than 2,600 exhibitors - including FPJ - from 84 countries attended the annual event in Berlin this year 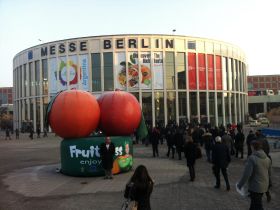 The annual Berlin event, which is the most comprehensive trade fair for the international fresh produce sector, also boasted more than 2,600 exhibitors from 84 countries.

Fresh Produce Journal and associated titles were among those exhibitors at the event, for which the partner nation was Argentina.

Dr Christian Göke, CEO of Messe Berlin, the event's organiser, said: "We can report an increase in the numbers of both exhibitors and trade visitors. It is a major catalyst for the fresh produce sector, and the key industry event.

"Exhibitors and trade visitors consistently praised the presence of sector decision-makers, as well as the excellent contact with fruit and vegetable producers, wholesale and retail traders and import and export providers.

"Ninety-eight per cent of trade visitors rated their business results at the trade fair positively. As in previous years, there was a high level of decision-making authority among the trade visitors. Some 75 per cent were at the management level of their own companies, or were responsible for purchasing decisions."