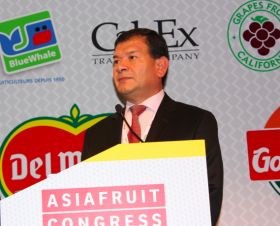 Latin American exporters seeking to expand into China’s second-tier cities should focus on establishing joint ventures with local distributors, delegates at the Asiafruit Congress in Hong Kong were told on Tuesday.

At a session on how Latin America can strenghten its role as a supplier of fresh fruits and vegetables to Asia, Juan Carlos Rios of Peru’s Intercorp Group said further market penetration is unlikely to come from the creation of direct distribution networks but through collaborations with regional distributors who had knowledge of the local market.

This view was echoed by Christian Carvajal of Chilean exporter association Asoex, who pointed out that suppliers should capitalise on the fact that many regional distributors in China were looking to make the leap into direct importing.

“The number of middle income earners in China is set to increase from 150m to 400m in next 10 years and 60 per cent of those will be in second tier cities. We need to seize on this opportunity,” he told the assembled delegates.

Chile and Peru have stolen a march over other countries in the race to satisfy China’s burgeoning demand for imported fruits and vegetables but one of the key challenges exporters face is how to widen market access further.

Peru’s fresh produce exports have risen from US$300m in 2004 to a projected US$827m in 2014, and a number of new irrigation projects due to come to fruition in the next two to five years will bring further major volume increases. Enrique Camet of Peru’s Association of Agrarian Producer Guilds (Agap) stressed that this has to be accompanied by the opening of new markets.

He praised the efforts of the government and national agrarian health service Senasa to secure access for Peruvian grapes, citrus, mangoes and asparagus to the Chinese market and said agreements for Hass avocados, pomegranates and blueberries were in the pipeline.

“We’re doing all we can from our end and we call on importers, retailers and wholesalers in Asia to also play their part in pushing their respective governments to accelerate new market openings,” he said.

Chile has already achieved considerable success in boosting Chinese demand for its cherries and blueberries through large-scale marketing campaigns and Carvajal pointed out that promotional efforts needed to be strengthened and more focus placed on promoting year-round consumption. Again, he said stressed that importers and local distributors had a key role to play in consumer education and marketing programmes.

Mario Steta of Mexican berry association Aneberries said Asia is set to play an increasingly important role in the country’s burgeoning berry export industry, with the Chinese market expected to open up in November 2014. He pointed out that Mexico could learn a lot from countries like Chile about how best to position itself in terms of branding.

“Fundamentally though, it comes down to building relationships and establishing credibility – there are no shortcuts, we need to work from the ground up,” he said. “Asia is a big opportunity but we need to be smart about how we impact those markets. It’s about doing our homework to see where Mexico can best compete."