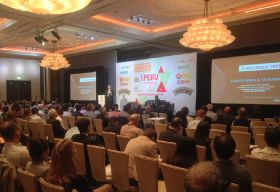 More than 250 delegates from 17 countries attended this year's Eurofruit Congress Southern Hemisphere at the JW Marriott hotel in Lima, Peru

Peruvian fresh produce exports are poised for huge growth in volumes and sales over the coming years as demand for its widening range of fruit and vegetables continues to climb.

That was one of several stand-out messages from this year’s Eurofruit Congress Southern Hemisphere, which saw more than 250 key industry players from a total of 17 countries convene for a two-day conference and networking event designed to uncover new opportunities in Peru’s fresh produce business.

As Carlos Enrique Camet, president of the country’s fresh produce export association Agap observed at the start of the two-day event, Peru has already witnessed staggering growth in its fruit and vegetable export sales over the past ten years – from US$220m in 2003 to a forecast US$1.8bn in 2014 – and is on course for further expansion as output across practically every product category continues to increase.

Tesco’s commercial sourcing manager for the Americas, Leo Cruz, told delegates Peru was now very much a central part of its sourcing plans for fresh produce.

“Peru is extremely important for us,” he commented. “It’s growing 8-10 per cent per year in terms of volumes and plays a strategic role for grapes, citrus, avocados and exciting new areas like berries and veg. Peru will probably be the most important country in the next ten years for our sourcing in Latin America.”

Liu Zijie, founder and chairman of Chinese Shanghai-based importer Goodfarmer, echoed that sentiment, but said Peru’s continued success would depend on its ability to supply the major emerging markets of the world, including China.

“China’s economy is growing 7 per cent per year. It has a middle class of 160m people and by 2020 this figure will double, making it nearly the same size as the whole US population. Plus the Chinese currency is still growing compared with the US dollar, fuelling an increase in buying power. So consumption of table grapes, for example, will continue to rise. Since there’s no domestic production during the winter (November to March, Peru has advantage of supplying our winter window and Chinese New Year.”

Mike Soulsby of Delica Global, which recently formed a joint venture with Unifrutti Chile to develop production of table grapes in northern Peru, said having the right varieties would also be crucial if the country’s fresh produce exporters were to enjoy sustained growth in the years to come.

“Beyond grapes, we have been involved in asparagus for many years. There’s not much to be done there but we can do some work in terms of logistics – new air routes, for example, encouraging some Asian carriers to come into Lima.

“We also do a bit of citrus in Peru, but the varieties planted need to be tied in with what markets are demanding. For example, lots of people planted Tangelo 5-6 years ago because it gave good yields and was easy to manage, but it’s not really demanded in many markets.

“People need to be intelligent about what citrus varieties to grow. [We need] ones that can last a 30-day transit to China. Blueberries are another very interesting product, but it comes down to market access. So far we can send to Hong Kong, Singapore and Malaysia. The Peruvian government needs to identify new markets in Asia and create market access.”

New kids on the block

Praising Peruvian producers and exporters for their hard work in generating such impressive growth over the past decade, Mayda Sotomayor-Kirk of US marketer Seald Sweet International nonetheless warned against compromising on quality in a desperate rush to secure new market share.

“Peru has come to the market relatively late and the danger is some exporters might want to get ahead of the competition by taking short cuts and compromising on quality, packaging and timing to try and get ahead,” said Sotomayor-Kirk.

“It might also be guilty of copying others and over-producing, sometimes with the wrong commodity. Too much of a good thing can potentially hurt you.”

Peru’s role in the North American supply chain was primarily about filling gaps in the supply chain, she added. “But Peru can't compete with locally grown product. When buyers are transitioning, the perception is that older product is lower quality. Peru has to change that perception. Peru has to compete with right product, right quality and right price.”