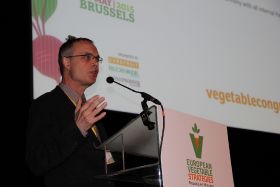 A French retailer that displays profit margins next to produce and combines a natural and high-tech concept layout could provide a snapshot of future retail, delegates attending European Vegetable Strategies 2015 in Brussels, Belgium, heard.

Its most novel aspect is the information cards next to each product, which display a breakdown of the pricing and the margin taken by producer and retailer as a pie chart, as well as grower and origin information.

“Established eight years ago, O’tera has only three stores but offers some interesting trends for the future,” said Netherlands-based consultant and leader of the EVS retail study tour, Hans Verwegen. “It’s taken a long time to take off as it takes a long time to develop a format. They see great opportunities in the Paris area, but it’s difficult to change people’s mindset.

“I think there is a future for this type of store. There is no spinning – it’s open and transparent," he added.

Around 60 per cent of products are from local producers and processors, and with only 500 SKUs, consumers vote democratically if they want to add something to the shelves and what it should replace.

Delegates also visited Grand Frais, which currently has just over 150 stores across France and resembles a covered market with an industrial design. Around 50 per cent of its SKUs are fresh produce, and it specialises in offering a wide range with a focus on seasonality.

“These stores might have 15 varieties of squash when they’re in season. Yesterday we saw they had 8 SKUs of strawberries,” added Verwegen.

Verwegen, who spoke at EVS during the event's morning session, said Grand Frais was strong on impulse selling, even on simple categories such as cucumbers, and relied less on promotion. "Its success comes from a clear concept, a focus on “fun shopping” and a wide variety of the freshest produce," he said.

“The challenge faced by Grand Frais is to keep a good harmony between all internal franchisees, balance a discount offer with a wide range, and reconnect with its roots in the marketplace.”