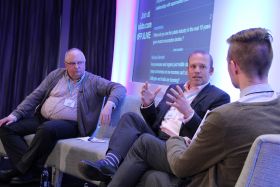 Charlie Hicks and James Truscott, in a session chaired by FPJ's Martyn Fisher

Video, humour and experiential marketing can help suppliers and wholesalers become closer to the consumer and eventually boost sales, according to speakers at FPJ Live last week.

James Truscott, managing director at potato giant Branston, talked about how the company has invested in becoming closer to the consumer through unusual customer research, as well as the Billy Branston bus initiative.

Brand manager for Total Produce Charlie Hicks then spoke about how he has used humorous market report videos, with references to popular culture, to engage with the company’s end customers and provide seasonal produce information.

Truscott said: “One of the more challenging aspect of private-label supply is you usually have no direct contact with consumers. But in the last year despite that we’ve tried to close that distance.

“One of the ways was consumer insight – using a new technique and videoing consumer behaviour in stores. Firstly this showed very different behaviour between people buying loose and pre-pack potatoes. That in itself was very interesting, but what we then did was intercept some of those shoppers and asked them about their experiences, and further to that, we got experts to analyse their facial expressions.

“If you make consumers rummage in loose potatoes, you actually get more negative emotions – so it’s a watch out.”

Truscott said another initiative was to improve the conversations between produce category in-store assistants and consumers, by sending video booklets of grower interviews and recipe ideas.

Speaking about the Billy Branston bus that travels across the UK to educate schoolchildren about farm to fork potato production, Truscott said: “We have no expectation that it will change consumption overnight, but we think it’s a good investment. We’re really proud of the bus – last week we had the 15,000th child on the bus and we’re fully booked until Christmas.”

Hicks, who has launched the Total Produce Local website and market report series, said the idea is to provide a constant supply of information to “encourage consumers to buy seasonally”.

“We love Twitter – who doesn’t,” he said. “We use it promote produce, sell new lines to customers, find new trends. Twitter is all about engagement – or at least being seen as engaging. Probably the most important word in food at the moment is provenance. One of the ways we do that is videos involving our customers, field to fork, to clearly link our growers with our customers.”

Hicks said he has been making market reports since his days working alongside Gregg Wallace in New Covent Garden Market. “It’s about wrapping up important information that you want your customers to have in stupid jokes,” he added.

“Is making video expensive? Not anymore. You can shoot, edit and upload all from your phone – you can all afford it. The technology is there for you, and if you don’t embrace it then your competitors surely will.”

Hicks and Truscott were speaking at FPJ Live, which took place on Thursday 21 April at The Belfry, Warwickshire.