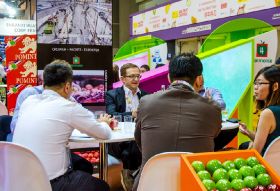 More than 11,000 visitors from 74 different countries poured through the doors of AsiaWorld-Expo in Hong Kong on 7-9 September for Asia Fruit Logistica 2016, marking a 22 per cent increase on last year’s attendance and smashing previous records.

Significantly, over two-thirds of trade visitors came from Asia, together representing more than 20 different Asian consumer markets across the region, including India, Taiwan, Malaysia, Thailand, Indonesia, Singapore, Korea, Japan, the Philippines and Vietnam.

More than 3,500 visitors came from China and Hong Kong, underlining Asia Fruit Logistica’s position as the best event to meet decision-makers in the fast-growing Chinese market.

Australasia was also well represented, with over 1,000 visitors from Australia and New Zealand. Visitors from the rest of the world accounted for one-third of the attendance, led by the Americas (15 per cent) and Europe (7 per cent).

As well as the surge in visitor numbers, it was the high quality of those visitors that continued to define the success of Asia Fruit Logistica, with the trade show attracting leading industry decision makers. Visitor survey results confirmed that more than 90 per cent of trade visitors were involved in purchasing and procurement decisions for their companies.

Visitors to Asia Fruit Logistica were able to take in a trade show that had grown significantly on last year’s edition, with an even wider range of products and services on display from across the world.

Over 650 companies from 37 different countries were showcasing their wares at the three-day expo, almost 100 more exhibitors than last year’s event. The breakout of exhibitors by region underlined the global profile of the show. Asia, together with Australia and New Zealand, accounted for 43 per cent of exhibitors, followed by Europe (with 24 per cent), the Americas (19 per cent) and the Middle East and Africa (14 per cent).

Asia Fruit Logistica also grew significantly in terms of overall exhibition stand space, expanding by 18 per cent compared with the 2015 edition. Several of the top-ten exhibiting nations underlined their commitment to the show this year with sizeable increases in stand space. China, Australia, Egypt, Turkey and Spain were the big growth drivers.

The exhibition formed the core of Asia Fruit Logistica’s Perishable Business Week in Hong Kong, which also featured a rich programme of conference events running from Tuesday to Friday. “Our Perishable Business Week provided visitors and exhibitors with a wide range of content and a first-rate opportunity to gain industry insights and network across the whole value chain,” said Wollbold.

It all got under way with the Asiafruit Congress, Asia’s premier fresh produce conference and networking event, which took place on Tuesday 6 September, the day before Asia Fruit Logistica opened its doors.

Smart Horticulture Asia, the new fresh-produce technology conference, launched on Thursday 8 September. The conference explored the impact of disruptive information technology on traditional fresh produce trade practices, crop cultivation and business models. Speakers included key figures from the fresh produce business, such as Edward Zhu, CEO of Chic Group, and Loren Zhao of e-tailer Fruitday, as well as leading horticulture technology experts, including Professor Salah Sukkarieh of the Australian Centre for Field Robotics and Ken Moynihan of Compac among others. Asia’s development is speeding up with the use of horticultural technology, but 'rightsizing of technology’ is as important as disruptive technologies in Asia. That was one of the key takeaway messages from the inaugural conference, which underlined the crucial role of global information standards.

Information opportunities continued for Asia Fruit Logistica participants on the show-floor with the Asiafruit Business Forum, a programme of two daily workshop sessions hosted by Asiafruit Magazine. Technology was the focus for Day One, which looked at ‘the packhouse of the future’, and at latest technologies spanning the supply chain. Marketing was the theme for Day Two, with sessions on ‘persuasive packaging’ and ‘new product launches’. Day Three turned the focus on Trade, with sessions on how fresh produce industry stakeholders can get the most out of free trade agreements, and on export opportunities for Asian fruit and vegetable suppliers.

The winners of the 2016 Asia Fruit Awards, the annual pan-Asian awards for Asia’s fresh fruit and vegetable business, were announced at Asiafruit Congress.

The Marketing Campaign of the Year was presented to leading fruit e-tailer Fruitday for its campaign to create the Chinese orange brand Mr Cheng, South Korean importer Jinwon Trading scooped the Importer of the Year Award, while the Produce Retailer of the Year Award went to Sam’s Club China.

The next edition of Asia Fruit Logistica takes place on 6-8 September 2017 at AsiaWorld-Expo Center in Hong Kong. Asiafruit Congress is held on 5 September at the same venue, with Cool Logistics Asia taking place on 6 September and Smart Horticulture Asia on 7 September.

Bhavin Shah, Gokul Fresh (India)
“The best thing about this show is you can meet so many suppliers and customers in one place.”

Josef Lazzara, J&F Lazzara & Sons (Australia)
“We’ve been coming to the show as visitors for three years now and it’s great to see how the Australian pavilion and the overall Australian presence has expanded over this time. We’ve met with a good cross-section of buyers, both existing and new.”

Kumar Aggarwal, Dev Bhumi Cold Chain (India)
“Asia Fruit Logistica is a fantastic show, especially in terms of bringing all the key people in the trade together – it’s one of the two shows we have to be at, together with Fruit Logistica in Berlin.”

Thomas Eskesen, Eskesen Advisory (Denmark)
“It’s been great to attend the whole Asia Fruit Logistica business week, and I particularly enjoyed the Asiafruit Congress. With top-class speakers and high-quality delegates, it was not just the networking that was excellent, but the actual content, where we found leading-edge insights. It’s becoming a must-attend event.”

Futoshi Teshima, Capespan Japan (Japan)
“In addition to meeting new and existing customers, this is a great place and a unique opportunity for our whole group to meet together and exchange ideas. It saves us a lot of time and money.”

Dan Lutman, JE Tipper (Australia)
“For me, the size and quality of presentation of the exhibitors are truly exceptional. This trade show has grown year after year and I'm surprised by how it’s expanded.”

Clark Meng, JD.com (China)
“The whole event is very professionally organised. We got to meet so many industry heavyweights and leaders at the Asiafruit Congress, and to hear their insights and comments, which was very rewarding for us. The Asia Fruit Awards segment was the most memorable for me. All three winners were unique and captured a particular development or trend in the business.”

Robert Verloop, Naturipe (US)
"I wasn't here last year, and to see the growth in the size of the booths and the participation from other countries and producers is fantastic. It shows that this entire region is one that has developed in its sophistication of marketing and the selling process.”

Fabio Zanesco, VI.P (Italy)
"It's really a very interesting fair which is growing, with quality professionals visiting and it’s very well organised. I think AsiaWorld-Expo is the ideal place: near the airport, near the major hotels, and everybody is here quickly. Business people want that."

Keith Packer, Aircoolbox (UK)
"We had massive interest over the three days of the show. We worked out that we made at least 120 genuine contacts and, among those, there are some really promising leads including global forwarders and airlines – exactly the kind of clients we’re looking for."

Mark Goto, Tokita (Japan)
“This is our seventh time exhibiting and it’s mainly to see our Asian customers. As a seed company, we don’t have the opportunity to meet fresh distributors during our usual operations. Here, we can meet many fresh distributors.”

Rick Chong, Sutherland SA Produce (Canada)
“Exhibiting at Asia Fruit Logistica translates to stronger returns for our growers in that we meet the buyers face to face, allowing us to convey the value and quality of Canadian fruit.”

John Said, Fresh Select (Australia)
“We’re here because we want to make certain we understand what the Asian consumer wants, and adapt what we have to meet their demands. We have the opportunity to have one-on-one discussions with buyers and ask questions. Already, we’ve learnt so much. This is our first time exhibiting, but it won’t be our last.”

Tony Nguyen, Ants Tropical Fruit (Vietnam)
“This is our first time exhibiting under the Vinafruit banner. Why? We have chance to meet our customers and potential new customers. We export to Europe, Asia and the US, with only fresh Vietnam-grown produce, and we are looking to expand our exports.”

Rita Biserni, Netpack/Sorma (Italy)
“We’ve been coming to Asia Fruit Logistica since the very first edition. We think it’s the best place to go if you want to get a feel of the Asia-Pacific market. The reason we keep coming is that every single year we see an increase in visitors and in exhibitors, which can also be potential customers for us as we produce packaging.”

Mark Buhl, Index Fresh (US)
“With such a multinational attendance, Asia Fruit Logistica is really amazing. Where else can you meet all your customers in one place?”