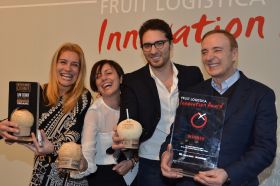 Applications open tomorrow (1 November) and all exhibitors at the trade event in Berlin, who have brought an extraordinary innovation to market between 1 November 2015 and 31 October 2016, can apply.

Don’t hang around – the deadline for applications is 18 November 2016. An application form and detailed eligibility requirements can be downloaded as pdfs from the Fruit Logistica website under the ‘Aussteller’ tab.

“The best awards you could wish for,” they were called by several of last year’s winners and nominees. The Fruit Logistica Innovation Award attracts tremendous interest from across the international media, and with minimum effort, applicants have the chance to reach a large audience – if you win, the international media will take notice.

Each year, the ten products nominated for the awards in Berlin enjoy fantastic media attention. Worldwide thousands of reports – in print, on the radio, on TV and online – are written about these innovations. And all it costs you is a few minutes to fill out an application.

The FLIA has built up a tremendous reputation over the last ten years. It is considered one of the most important accolades in the global fruit and vegetable sector and enjoys a great reputation among industry experts – not least because experts judge the competition itself.

These “Oscars of the industry”, brought to you by Messe Berlin and Fruchthandel Magazine, reward outstanding innovations in the fruit and vegetable sector and service industries.

Here’s how it works: A panel of experts will nominate the ten most significant innovations of the year for the award; these ten innovations will then be presented to delegates in a display area at Fruit Logistica 2017; and they will be voted on by the 70,000+ delegates expected at the first two days of the event.

The award will be officially presented at an awards ceremony on 10 February 2017.