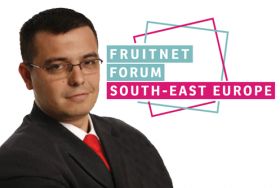 Serbia’s Minister of Agriculture and Environmental Protection, Branislav Nedimović, is to officially welcome delegates to Fruitnet Forum South-East Europe, a new event for the region’s fresh fruit and vegetable business which takes place in Belgrade, on 29 November.

Nedimovic, who was appointed to the position in August 2016, recently identified the creation of additional value in agricultural production as a major priority for Serbia’s agricultural sector as a whole, something he said could only be achieved with new investment in technology and infrastructure such as packhouses and storage facilities.

He has also suggested that the Serbian government itself could actively participate in that process of value addition. “This is one of the Ministry’s goals, for example to buy fresh plums directly from producers, dry them and then sell such plums at a much higher price on the market,” he recently told Serbian Monitor. “If we do this, there will be more money for the plum grower too, in the end.”

With an eye on the domestic market as well as any export opportunities that might arise, South Serbia in particular could become an important area for fruit and vegetable sourcing, he added, but this would require concerted effort to develop processing facilities.

The inaugural Fruitnet Forum is part of a brand new series of discussion and networking events designed to promote interest, investment and innovation in emerging areas of the fresh produce business.

Mike Knowles, editor of fresh produce business magazine Eurofruit, which is organising the event, commented: “Eurofruit has always sought to investigate new and emerging areas of the business, and the apparent strong potential in south-east Europe to grow the fresh fruit and vegetable industry makes the region a good choice to kickstart our new venture.”

He added: “In particular, we want to draw attention to new commercial opportunities that may exist for companies in the region to develop their exports and for buyers to source from the region. We also want to see what opportunities there might be for suppliers and marketers to sell their products here in the region itself.”

To register for the event, visit www.fruitnetlive.com/forumsee