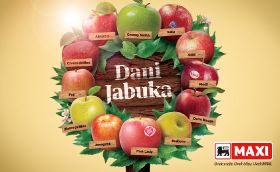 Delhaize Serbia is running a new marketing campaign for apples

One of south-east Europe’s leading fresh produce buyers has joined the programme for Fruitnet Forum South-East Europe, the conference and networking event for the fruit and vegetable business which takes place in Belgrade on 28-30 November.

Ivan Beloica, category manager for fresh fruit and vegetables at Delhaize Serbia, will offer his company’s take on the main trends that are currently shaping the market for fresh produce across south-east Europe, outlining the potential for growth it sees when it comes to domestic and imported products, and explaining the various demands placed on suppliers as far as sourcing, merchandising and marketing are concerned.

Beloica will appear alongside Hugo Vermeulen of Dutch marketer Cool Fresh and Pavle Bajković of Serbian supplier Apple World, who will also be on hand to discuss emerging opportunities in the region.

Founded just over a decade ago, Delhaize Serbia has been expanding steadily under its Maxi supermarket brand and now has around 450 stores in the region.

In Serbia itself, Maxi became the biggest retail company when it acquired C-market and Pekabeta, and in the meantime it has been able to expand into other markets, including Montenegro, Bulgaria and Albania.