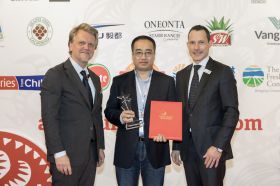 Belgian Fruit Valley (BFV) won the Marketing Campaign of the Year Award for its pioneering work to develop the market for Truval-branded Conference pears across Asia.

Introducing the winner, Asiafruit editor John Hey said the award recognised BFV’s efforts not only over the past year, but also over the past decade, to build a market for Conference pears in Asia.

The Belgian cooperative has led the way in opening up new markets – in particular China and India, he noted. ‘Western’ pears represent a relatively new product to many consumers in Asia, who are used to local Asian varieties with very different characteristics. Together with its import and retail partners, BFV has run a highly structured and consistent campaign in China to educate trade and consumers about Conference pears, demonstrating how best to handle and enjoy the fruit. The company has also run similar activities across a number of other Asian markets. In turn, BFV has helped to pave the way for other pear exporting companies and countries to conduct their own campaigns to promote western pears.

“It’s a great honour for BFV to be awarded this accolade as a recognition of the faith, persistence, commitment and teamwork for all involved from the Belgian side and especially our Chinese partners, without whom introducing a new product in a new market would not have been possible,” said Evrard. “It is fitting that we can today receive this award from an organisation that helped create the meeting ground to bring us and our partners together.”

Importer of the Year: Freshmart Singapore

Family-run business Freshmart Singapore scooped the Asia Fruit Award for Importer of the Year. Established in 1980, the Singapore-based fresh produce importer and distributor supplies over 100 supermarkets island-wide as well as several food service and wholesale customers.

Freshmart was recognised for the strength of its team and operations, its focus on building supplier and customer relationships, and its leading role in developing several categories in Singapore’s fruit import market. Hey singled out the company’s work in growing the berry category, where it has been both aggressive and progressive in building a 52-week supply. He also highlighted the company’s efforts to build demand for avocados and organic produce in Singapore, which have been underpinned by consistent trade and consumer education.

Kevin Koh, director of Freshmart and son of the company’s co-founder Peter Koh, accepted the award.
"We are humbled to be receiving this award and recognition from the industry as it reaffirms our company's mission and values,” said Koh. “This would not have been possible without all the support our stakeholders have given us and the confidence our customers have placed in us."

The Produce Retailer of the Year Award was presented to Hema Supermarket for the success of its pioneering new online-to-offline (O2O) retail concept, which brings fresh produce to the fore.

Having opened around a dozen stores in China in little more than a year, the Alibaba-backed retailer has broken ground with its innovative model.

The in-store experience is critical for Hema Supermarket, with its expansive stores offering a wide range of premium fresh foods as well as cooking services where consumers can purchase foods and have meals prepared on site. The stores also function as distribution centres processing online orders. Shoppers can order from Hema by mobile app at home, and have fresh produce and meal solutions delivered inside 30 minutes within a 3km radius of the store. There are no cash or credit card transactions – all payments at the store are made through Alibaba’s Alipay app, saving time and allowing Hema to collect valuable consumer data, which can be used to improve its service and boost customer loyalty.

“The integration of online and offline retail channels has been a dominant trend in China over the past year,” said Hey. “Hema Supermarket has demonstrated how the two can be bridged successfully in fresh food, while also setting a precedent and new expectations in terms of the consumer experience.”

“I'm so proud to stand here to receive this great award on behalf of Hema Supermarket. As a new retail model, Hema is committed to delivering a faster and fresher shopping experience to our customers using a combination of technology and supply chain innovation,” he said. “To Hema and all of our team members, the Asia Fruit Award is a huge honour and encouragement.”

The three winners of the Asia Fruit Award were presented with their trophies and certificates by Wilfried Wollbold, commercial director of Asia Fruit Logistica organiser Global Produce Events, and Chris White, managing director of Fruitnet Media International, which publishes Asiafruit Magazine and organises the Asiafruit Congress.

The Asia Fruit Awards were presented before the Networking Lunch at Asiafruit Congress, Asia’s premier fresh produce conference event held in Hong Kong. The conference set the scene for Asia Fruit Logistica, which runs from 6-8 September at AsiaWorld-Expo Center.