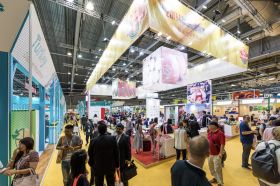 A total of 813 exhibitors took part from 43 different countries

More than 13,000 trade visitors from 76 different countries poured through the doors of AsiaWorld-Expo on 6-8 September for Asia Fruit Logistica 2017.

Visitor numbers were up by 16 per cent on last year’s event, setting a new attendance record, according to event organiser Global Produce Events.

Some 70 per cent of visitors came from Asia, with 20 different markets across the Asia-Pacific region represented. The main origins in terms of visitors were China, Hong Kong, India, Taiwan, Korea, Malaysia, Indonesia, Singapore, New Zealand, Japan and Australia.

Visitors to Asia Fruit Logistica found a show that had expanded by almost a third compared with last year’s event in terms of exhibition space.

Exhibitor numbers increased by more than 150 on the 2016 edition. A total of 813 exhibitors from 43 different countries took part, while 24 national pavilions featured at the event.

China remained the single-largest exhibiting country at Asia Fruit Logistica, with bookings and company participation expanding by more than 50 per cent compared with last year’s event. The other leading exhibiting countries were Italy, Egypt and Australia, which ranked second, third and fourth respectively in terms of exhibitor bookings.

Spain leapt into the top five exhibiting countries for the first time with more than 40 Spanish companies showcasing their products and services. South Africa surged into sixth place, with exhibitor numbers tripling to 33 companies.

Close to half of all exhibitors at Asia Fruit Logistica came from the Asia and Oceania regions. Europe accounted for almost a quarter of exhibitors, followed by the Americas (15 per cent), Africa (12 per cent) and the Middle East (4 per cent).

Five countries also made their debut appearance as exhibitors at the show, including Costa Rica, Finland, Jordan, the Ukraine and Uzbekistan.

It all got under way with the Asiafruit Congress, Asia’s premier fresh produce conference event, which took place on Tuesday 5 September, the day before Asia Fruit Logistica opened its doors. More than 400 high-level industry professionals from around 40 different countries attended the conference, which was addressed by expert speakers covering a range of hot topics.

Major apple and pear cooperative Belgian Fruit Valley won the Marketing Campaign of the Year for ‘Truval Pears’, a long-running campaign to develop new markets for a new product across Asia. Freshmart Singapore took out the Importer of the Year Award, while the Produce Retailer of the Year Award went to Alibaba-invested O2O retailer Hema Supermarket.

Information opportunities on the show-floor

Visitors to Asia Fruit Logistica found plenty of information opportunities on the show-floor with two Hall Forums this year. Hall Forum One – the Asiafruit Business Forum – offered practical workshops covering topical subjects in the fields of packaging, marketing, and production and trade.

Hall Forum Two turned the spotlight on the worlds of hi-tech and logistics. Each morning, Smart Horticulture Asia explored data management and disruptive technologies at different stages of the supply chain. Each afternoon, Cool Logistica Asia offered practical workshops on cold-chain management covering a range of issues, from the future of container shipping to exporting to Asia by air.