Dynamism on display at Asiafruit Congress 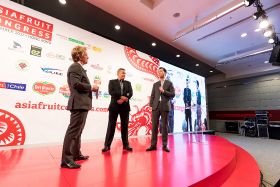 While protectionism may be fuelling uncertainty in the global economy, confidence in Asia’s fresh produce business is seemingly sky high, as evinced by the exciting new retail, trade and consumer trends emerging across the region.

Industry experts charted the rise of several of these trends at last week’s Asiafruit Congress in Hong Kong.

The momentum behind the fresh produce business in Asia is perhaps best exemplified at retail level.

As the modern retail sector continues to mature in Asia, suppliers can expect more direct collaboration with storeowners and operators, according to Shirley Zhu, who leads the South East Asia research programme for global food and grocery analyst IGD. However, specific models and consumer trends vary significantly according to each market’s stage of retail development.

“In the embryonic markets, you can expect lots of new market entrants from both domestic and imported players,” she explained. “The emerging giants include Indonesia and the Philippines, and in these markets we expect stronger local and regional players. Logistics can also be a huge problem as both markets are made up of thousands of islands.”

In the more developed retail markets, such as Thailand, Japan, China and Taiwan, Zhu said retailers had stopped “land-grabbing” and are now working to understand their customers, trial new formats and develop an identity.

“One of the themes we have seen is big stores are utilising their space better,” she continued. “Larger stores are also trying to drive footfall through their destination products, these are the products they are known for, whether that’s fresh or beauty or wines.”

The growth rate in Asian retail is similar to Latin America, said Zhu, at around six per cent year-on-year. By 2021, Asia will be bigger than Europe and North America combined, retaining its crown as the largest global retail market.

Following Zhu’s presentation, the opening session zoomed in on some of the new retail concepts taking off in Asia through case study-style interviews with pioneering players. The integration of online and physical shopping and membership systems are paving the way for a new era of shopping. Asiafruit Congress moderator Chris White interviewed Paul Sheh of Alibaba-backed online-to-offline (O2O) retailer Hema Supermarket, followed by Walmart China’s Winstone Chee and Sam’s Club China’s Yoep Man, about their respective concepts and strategies.

The role of protectionism

The ability of international suppliers to capitalise on Asia’s retail boom could be tested over coming years. While some trade analysts argue the rise of protectionism could create instability in the global economy, others suggest it could generate new opportunities for fresh produce shippers. This was a major discussion point during the final general session of this year’s Asiafruit Congress, which heard how market diversification was key to managing increased risk.

Michael Every of Rabobank kicked off the session with a thought-provoking presentation showing how history can be a useful guide in predicting the fallout from the current wave of protectionism sweeping the globe.

With the dollar-based global trading model looking more and more precarious, the emergence of new trading alliances such as China’s One Belt One Road initiative will have major implications for fruit producers, Every warned.

The politicisation of world trade could lead to new alliances emerging and old ones crumbling, and fruit producers could find themselves caught in the middle of an ugly trade war that forces them to choose between trade partners.

In the panel discussion that followed Every’s presentation, Camposol Trading’s José Antonio Gómez pointed out that the rise of protectionism in traditional markets is being offset by growing trade with countries like China.

He said the recent opening of Camposol’s new office in Shanghai was a “statement of intent” from the company. Filip Fontaine of Belgium’s BelOrta shared this optimism, insisting that European producers had already proven themselves to be well equipped to deal with shifts in the global trading landscape by regrouping quickly in the wake of the Russian embargo to find new markets, including China and India.

Building a global brand that is relevant to local consumers is a central objective of suppliers like Camposol and BelOrta, who are looking to develop new trade channels in Asia. Jiunn Shih, Zespri’s general manager for marketing, offered delegates a valuable insight into his company’s work in this space during the second general session of the conference.

The key, according to Shih, was to engage consumers and move beyond the focus on quality and the New Zealand origin typical of previous marketing efforts.

“We’ve been telling the story about our growers and their quality for a long time,” he said. “It is an assurance of quality, but just that. Quality is an important element, and a fundamental part of our communication in some markets, but it is not the only one.”

The issue, he said, was that fresh produce had developed the image of a commodity in consumers' eyes. “This is not great if we want to deliver better long-term value to our growers,” Shih told delegates. “The way to fight that is by telling better stories, stories that connect at an emotional level with the consumer, helping people to make sense and find meaning.”

Shih concluded with some tips for fresh produce marketers, not just in Asia, but globally. “When marketing, put consumers at the heart of what you do,” he said. “Think of the people you are actually selling to. And don’t try to do everything. We don’t have as deep pockets as the FMCG sector, so concentrate on what is most important.”

Delegates to Asiafruit Congress were also able to choose from a range of afternoon Breakout Sessions. One of the sessions examined market opportunities in Vietnam, while another explored success strategies for European exporters to Asia. The role of e-commerce in the B2B environment also came under the spotlight, as did the regulatory landscape for protecting IP varieties in China.

A traditional lion dance brought a splash of colour and local flavour to the Networking Lunch at Asiafruit Congress, which was sponsored by Cherries from Chile. The ceremony marked the launch of Chile’s new cherry consumer campaign in China. Running in 48 cities and covering a wide range of activities spanning the major distribution channels, the US$5m campaign is Chile’s largest generic promotional campaign ever in China.

Major apple and pear cooperative Belgian Fruit Valley won the Marketing Campaign of the Year for ‘Truval Pears’, a long-running campaign to develop new markets for a new product across Asia. Freshmart Singapore took out the Importer of the Year Award, while the Produce Retailer of the Year Award went to Alibaba-invested O2O retailer Hema Supermarket.