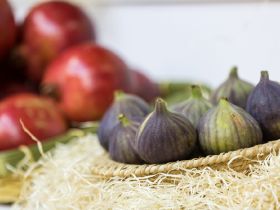 Continuing its series of exhibitor spotlights from Asia Fruit Logistica, Asiafruit looks at some of the newer-to-market products that were on display at the Hong Kong show.

Özler Ziraat (Turkey)
The market for Turkish figs continues to pick up in Hong Kong, according to exporter Özler Ziraat. “It is peak season for the Bursa,” said Ayse Özler, “We visited some stores and saw a lot of shelf space dedicated to figs. For the last two years, the retailers have been doing tastings and promotions. Five or six years ago, no one knew about figs in this part of the world, but now Hong Kong is a significant buyer.”

Comenuez (Mexico)
Global pecan production is on the up and as one of the world’s biggest exporters of the nut, Mexico, is keen to find new markets. “The US is our main market, accounting for 80 per cent of our export volume,” explained Myrna Arias of Comenuez, the association that represents Mexican producers.

Savéol (France)
Brittany, France-based tomato specialist Savéol exhibited at Asia Fruit Logistica for the first time as it surveys the potential of the Asian market. “We are here to have a look at the market,” said Mélanie Delanoe. “We will also visit some supermarkets in order to see what the tomato range looks like here.”

Fresh Select (Australia)
Visitors were drawn to the site of purple coloured cauliflower at Fresh Select’s stand. The leading Australian vegetable grower is finding increasing favour for its produce in Hong Kong and Singapore, where it markets under the Naked Lettuce and Fresh Select brands.

Frutas Nanky (Ecuador)
Negotiations to open up the Chinese market to Ecuadorean pitahayas could be concluded by the end of this year, according to Juan Lopez of Frutas Nanky. In the three years the company has been attending Asia Fruit Logistica it has seen a steady increase in interest from buyers and Lopez said their sweetness makes them a hit with Asian consumers.

JP Beemsterboer (Netherlands)
High-quality pink onions from the Netherlands could prove popular among Asian consumers and buyers after establishing a loyal following in Latin American and African markets. That’s according to Marco Lont of JP Beemsterboer Food Traders, who was at Asia Fruit Logistica to promote the company’s Crimsun pink onion brand, among a number of other products. Crimsun onions are already selling well in Malaysia, he added.