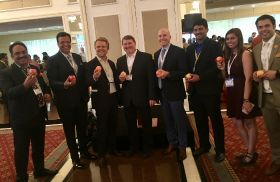 Leading Indian fresh fruit importer IG International has launched the Piñata apple variety in India together with its US supplier Stemilt Growers.

The partners celebrated ten years of working together with a trade launch for Piñata at Fresh Produce India, India’s leading fresh fruit and vegetable convention, on 26 April.

The ceremony was followed by a consumer launch of Piñata the same day at the Taj Mahal Palace in Colaba, Mumbai, where Bollywood actress Yami Gautam unveiled the premium tropical apple to the Indian media.

Piñata is being positioned by IG as a refreshing treat for Indian consumers during the hotter summer months. “Piñata apples are crisp, juicy and equal parts sweet and tart, which makes them great for multiple culinary purposes,” IG and Stemilt said in a joint media statement. “Harvested in mid-October at Stemilt’s Washington State orchards and in great demand across the globe, these beautiful red and orange coloured apples are available from November to May each year.”

“We are proud to add Piñata apples in IG International’s wide assortment of exotic fruits from India and abroad,” said Tarun Arora, director of IG International. “Its versatility and exceptional flavour have made it a much sought-after variety amongst consumers around the world, and we are confident that it will replicate its global success story in India as well.”

Delegates to Fresh Produce India were presented with a Piñata apple gift pack at a special dessert counter featuring recipes made with the apple.

Addressing delegates at Fresh Produce India, Stemilt vice-president Mike Taylor said it was a landmark day for the two companies, which had been working together for ten years. “IG are part of our family. We’re two family-run companies on opposite sides of the world with shared values and shared goals in growing the market together,” he said.

“We’re going to have a wide campaign going with IG with all kind of marketing endeavours to promote this apple with its exciting new flavour for consumers. Today, I have learned so much about India and it’s been incredible to think about all the opportunities we share together.”

IG also screened a video at the event where Stemilt brand ambassador and celebrity chef Kunal Kapur explained some of the culinary benefits of Piñata apples.

IG International has already established a strong and consolidated fresh produce procurement and handling business, handling over 31 varieties of fruit from 22 countries in order to meet a sizeable range of tastes across India.