Flavour of tomatoes ‘needs to improve’ 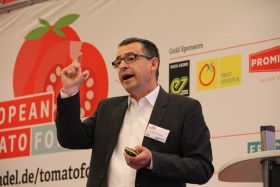 Tomato breeders have been urged to improve the flavour of new varieties after it was revealed almost half of German consumers aren’t satisfied with the way they taste.

Speaking at the European Tomato Forum in Düsseldorf, Kristin Jürkenbeck of Georg-August University in Göttingen quoted a study showing that 43 per cent of consumers weren’t happy with the taste of the tomatoes they buy.

She advised seed companies to place a greater focus on taste in a bid to win new consumers and told suppliers to communicate a variety’s superior flavour if consistent quality could be guaranteed.

The researcher stressed that along with price and colour, taste was the most important consideration for shoppers, however up until now, the storability and shelf life of tomatoes has often taken precedence.

Meanwhile, in large tomatoes, breeders should be aiming to increase Brix levels from four or five to seven or eight, he said.

Another way of improving consumers’ taste experience is to ensure they know how to store tomatoes properly – at room temperature rather than in the fridge – as this can help ensure greater customer satisfaction.

Meanwhile, the importance of colour to consumers was underlined by the fact that green and yellow varieties of tomatoes are wrongly assumed to be unripe by many consumers.

To avoid these negative connotations, Jürkenbeck advised companies to place an emphasis on educating consumers about more niche tomato varieties.

She also suggested selling tomatoes of different colours at farm shops where it can be easier to communicate with customers.

Opportunities also lie in small-scale, environmentally-friendly production, with  Jürkenbeck saying over a third of consumers are prepared to pay a higher price for local or sustainably produced tomatoes.