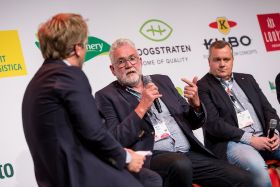 Peter Klapwijk speaking at the Global Tomato Congress in Rotterdam

Greenhouse growers have been surprised at how long it is taking for year-round tomato production to become a reality but believe it is the future of tomato supply.

Speaking at the inaugural Global Tomato Congress in Rotterdam, Peter Klapwijk of 2Harvest said: “Twenty years ago, I was expecting year-round production to progress faster. But what I hear today, especially from retailers, is that reliable year-round product is very important, and I think artificial light is the most important tool to make this possible and to make the quality stable.”

At the conference both Signify and Fluence presented the efficiency, quality and environmental benefits of using full-spectrum LED lighting, but Klapwijk acknowledged that growers have been slow to adopt artificial lighting due to their conservative mindset and reluctance to change.

“As long as people can make money producing normal, seasonal crops, there’s not so much interest in light,” said the greenhouse producer and consultant. However, he stressed it was “amazing” that with 310 micromoles of light you can produce the same product every time regardless of the time of year.

Almost half of Dutch greenhouse tomato production is now lit by LEDs (700ha out of 1,800ha), making it technically possible for many producers to grow 12 months a year, however at present the cost of doing so is prohibitive and growers acknowledge that product quality suffers at certain times of year.

The major impact that year-round production in the Netherlands would have on southern growing regions like Spain, Morocco and Italy is also important to consider.

Theo Thekstra of Fluence believes that where lighting technology is concerned the big steps forward have already been made. “The efficiency is there already,” he said. “I think the next step we’ll see is to create a fully networked greenhouse with sensors and LED lights.”

One obstacle that greenhouse growers could face is in convincing consumers that artificial light can actually produce a higher quality product than natural light, but Klapwijk insisted that higher-tech growers in western and eastern Europe are in fact encountering fewer problems than producers further south who face high temperatures and need to use vast quantities of water to irrigate their crops.