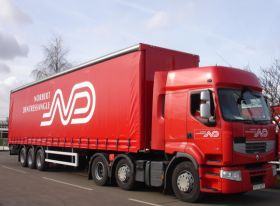 Transport and logistics company Norbert Dentressangle (ND) has announced a dip in turnover during the opening quarter of the year, down 1 per cent to €949m from €958m in the same period of 2012.

Despite this, the group said that business "held up well", and saw strong sales in the UK market in particular, with the proportion of turnover generated outside of the group's home market of France coming to 58 per cent of total business.

The turnover dip was attributed to a 4.1 per cent drop in turnover for the transport segment, down to €500m from €522m.

However, a positive UK market helped push turnover in the logistics segment up 3.4 per cent year-on-year to €436m, while there was a slight increase in freight forwarding turnover of 1.4 per cent to €33m.

“Norbert Dentressangle maintained a solid activity level in the first quarter of 2013, despite a deteriorating economic environment since the start of 2013, particularly in France," noted Hervé Montjotin, chairman of the executive board. "Against this backdrop, the group has maintained a sharp focus on its operational management and continues to focus on cost control in relation to business volumes handled for its clients, particularly in the Transport business.

"Beyond that, we have confidence in the future benefits of our international development strategy, which is aimed at strengthening transport in central Europe, establishing logistics outside Europe, and expanding our freight forwarding network worldwide," he added.