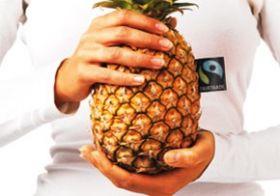 Fairtrade International is pioneering a major power-sharing effort between producer groups in both the Northern and Southern Hemispheres at the organisation's annual general meeting (AGM), which takes place on Wednesday 12 June.

Farmers from Africa, Asia and South America, who produce Fairtrade bananas, tea, coffee and other goods, will have an equal say in the running of the global Fairtrade movement, representing half the votes at the AGM in Germany.

Previously, growers and producers in the Southern Hemisphere had three out of 22 votes at the meeting, with the majority of votes held by national organisations in Northern Hemisphere consumer countries – a process that was amended in January to offer greater balance.

Marike de Peña, vice-chair of Fairtrade International and director of Dominican Republic-based banana cooperative Banelino, said that the arrangement would help serve the interest of more than 1m small Fairtrade farmers and workers.

Delegates in Bonn will vote on the organisation's accounts, board elections and new applicants and markets.

“We are convinced that what we have just achieved in Fairtrade International is a very important breakthrough; people in the south are not just beneficiaries but, for the first time, co-owners," said chief Adam Tampuri, chair of Fairtrade Africa and the Gbankuliso Cashew Farmers Association in Ghana. “This is not the end of the story and we still have a long way to go, but this fundamental step is a source of great motivation for us to strengthen and improve Fairtrade in the years to come.”

Molly Harriss Olson, chair of Fairtrade International, added: “Producers have always been involved centrally in everything that we do. In fact there is no major decision that is taken without their guidance and support. But there is a big difference between having a seat at the negotiating table (or even a few seats) and owning half of the board room.”