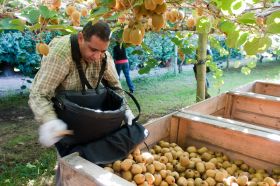 New Zealand’s Ministry for Primary Industries (MPI) has painted a positive picture for the medium-term future of the country’s agricultural sector, despite a significant drop in kiwifruit export earnings.

According to the Ministry’s annual situation and outlook report, released last week, the revenue from kiwifruit exports could fall by over NZ$150m this season.

Kiwifruit export volumes in the year to 31 March, 2014 are expected to fall 13 per cent, as the industry continues to move its gold production base to varieties more resistant to the Psa vine-killing disease.

While a drought over the New Zealand summer has had a profound impact on the entire primary sector’s export revenue - tipped to decline by up to NZ$1.3bn over the 12 months to 31 June - the report suggests industries have the capacity to bounce back.

“It’s been a season of two halves for the land-based industries, with many areas impacted by drought in the second half,” MPI sector policy director Jarred Mair said.

“The impacts of the severe drought continue and could continue for several seasons.

“As many commentators have said in the past few months, the challenge to the primary industries is to develop resilience – to protect their ability to continue to produce and export, as well as to add value.

“This will help meet the goal that MPI has set, which is to help the sector double the value of primary sector exports by 2025.”

The report predicted primary sector revenues will increase by 2.2 per cent to NZ$24bn in the year to June 2014, with this figure likely to climb to NZ$29bn by 2016.

“This outlook is based on maximising opportunities in Asian markets, recovery from the global recession and an assumption of a slightly lower New Zealand dollar against trading currencies.”